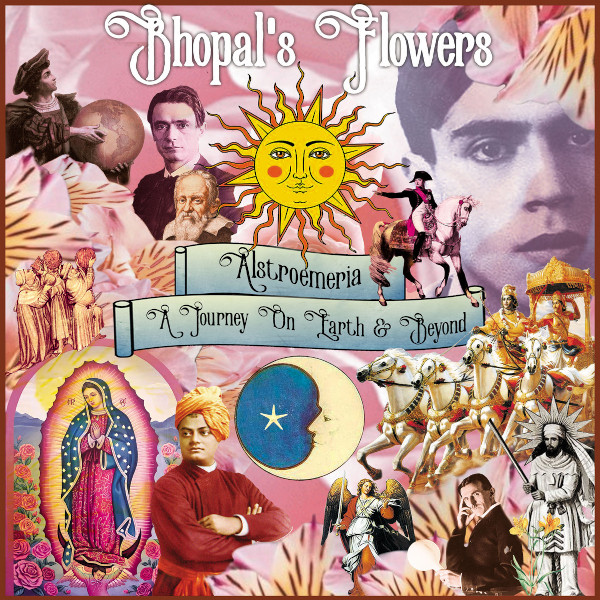 Something has been nagging me about the various jangle pop bands growing in popularity today, and I think that I have finally put my finger on it. While these bands are enamored with the Rickenbacker sound — and who isn’t? — there is something lacking in the results. They have captured the 60s / 70s West Coast LA psych vibe, but not the essence. Back in that era there was an edge to the music: the Vietnam war was raging, and the anger felt by many young bands found its way into their music, augmented by hallucinogenic stimulants. There was an urgency to the music and lyrics, which were foremost. And that is what I find missing with contemporary jangle pop. The songs are mellow, all rounded corners, nothing that bites into you and grabs your attention. Now, having said all that, Canadian neo-psych group Bhopal’s Flowers straddles this gap. Bhopal’s Flowers first came to my attention via Fruits de Mer. Their song “H.I.G.H.W.A.Y.S.” appeared on The Half-Time Orange freebie compliation and their raga rock cover of Cream’s “I Feel Free” on FdM’s massive compilation A Band for All Seasons. I was impressed and eagerly awaited the release of their double vinyl LP Alstroemeria - A Journey on Earth & Beyond. The double album roughly follows a day in the life, with the first LP, subtitled Sunshine Pop, running from 5 AM to 6 PM, and the second LP, subtitled Moonlight Pop, running from 7 PM to 4 AM, completing the 24 hour cycle. When Bhopal’s Flowers blends Eastern and Western music, they excel. The combination of the signature Rickenbacker sound with sitar, tamboura, and tabla is magical. Following the 24 hour day, these magical moments occur in the wee hours of the morning on Sunshine Pop and the pre-dawn hours on Moonlight Pop: “Enjoy Your Life on Earth [5 am],” “Napoleon Candy Sweet [7 am],” “Hail to Her Sun! [9 am],” “A Night at the Devachan [1 am],” ‘“Moon - Earth - Jupiter [2 am],” “Eastern Star [3 am],” and “I Feel Free [4 am].” Sandwiched in between are a set of gentle neo-jangle pop songs that just don’t connect with me, except for perhaps “When the Sinner Becomes a Saint (Then the Devil Bleeds) [1 pm]” and “1221 Jasmin Street [3 pm].” My wish is that Bhopal’s Flowers would focus more on their unique blending of musical cultures, perhaps covering more late 60s tunes, rather than strictly psych pop. Alstroemeria - A Journey on Earth & Beyond, though a bit uneven, is worth the investment if just for the raga rock songs.