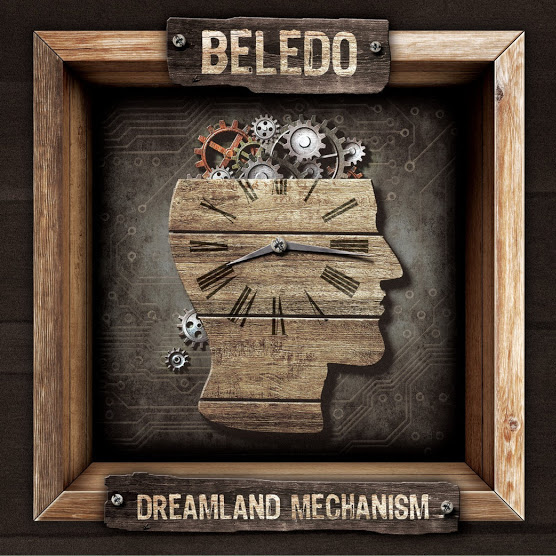 From reading the credits, Uruguayan guitarist Beledo’s Dreamland Mechanism may seem like a bit of a grab-bag, with differing personnel from track to track, including some with Beledo himself handling everything but percussion. Nearly all of the guitar parts – acoustic, electric, Spanish – are provided by the leader, who also contributes violin, keyboards, and accordion, plus bass in a few spots. Drums are handled by Gary Husband on most tracks, with Doron Lev on a couple, and some featuring multiple percussionists instead of a drum kit. Bass duties are assumed by Lincoln Goines, Tony Steele, or Rudy Zulkarnaen, track depending, except when Beledo takes over. Fellow Moonjune guitarist Dewa Budjana gets a guest spotlight on one track. But in spite of all the musical chairs (so to speak), the album sounds remarkably consistent, maintaining an identity whether tackling acoustic latin jazz or classic guitar fusion (either in a power trio configuration or with an expanded lineup). On the electric tracks, there are similarities with some of Allan Holdsworth’s music in the way that unusual chord voicings back the melodies, though Beledo’s lead work bears only occasional passing resemblance to Holdsworth’s. When playing acoustic, Beledo exhibits pronounced latin tendencies, not surprising for a South American player. The acoustic track “Marilyn's Escapade” bears some resemblance to Chick Corea’s “Armando’s Rhumba,” mostly due to Beledo’s violin and his use of piano as the main backing instrument. “Mechanism” takes on a slight Mahavishnu tinge as an electric arrangement featuring both guitar and violin. “Budjanaji” features Beledo and Budjani fronting SimakDialog’s rhythm section. While Beledo’s playing is his own, the closest comparison is indeed Holdsworth, though there is no imitation here. (It is interesting to note that Holdsworth has been known to play violin as well.) Moonjune is becoming a veritable one-stop shop for outstanding guitarists from around the world, and this is an outstanding addition to the collection.