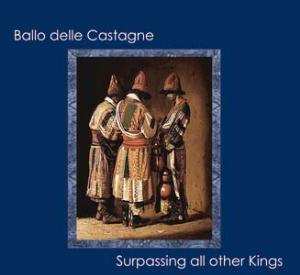 Led by the duo of Vinz Aquarian (vocals, synthesizer, lyrics) and Diego Banchero (bass, backing vocals), the two are joined by a number of other players on guitars, keyboards, drums, and additional vocals. Surpassing All Other Kings is part three of a trilogy about the Babylonian hero Gilgamesh, that began with the 10” single 108 (2009) and continued with the band’s second album Kalachakra (2011). While I can’t speak to any of the earlier releases, here we are in psychedelic-affected heavy goth-rock territory, which is to say they are right at home on Black Widow along with bands like Jacula, Orne, and Antonius Rex. Most of the ten cuts here feature very dense arrangements enriched with thick choruses of male and female voices, doomy haunting atmospherics, and –mostly by the way of guitarist Roberto Lucanato, some heavy psychedelic effects and distortion. Some of the pieces, like “Königin der Nacht” feature haunting melodies that would be right at home on some horror movie soundtrack, while “Il Viaggio” rocks with some heavy guitar and organ grooves with ever-present wah-wah, before the female vocals kick in and take it into a post-rock gloom and doom scenario. Another standout is the mysterious “Rorate Coeli,” featuring a simple repetition of a series of chords subject to echo delay and awash in a thick brew of studio effects. The band mixes languages, one will hear lyrics in Italian, German, and English, track depending. The only piece here that doesn’t work is the anti-war closer “Apocriphon of Gilgamesh” where the band takes excerpts from an old U.S. presidential speech and an interview with a soldier, and grafts some very predictable and unimaginative war-like music over them. This has been done to death before, and offers nothing new or interesting. Other than that, this is a fairly decent album.

Christian Vander - A Tous les Enfants... – A children's album from Magma founder and leader Christian Vander? Precisely. I was more than a little skeptical when I first heard about this, and was even more hesitant to buy it when I heard...  (1995) » Read more