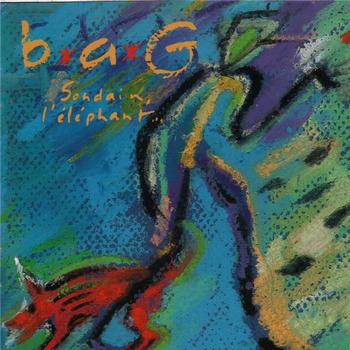 baG, a French band, was Musea’s foray into world music. baG traveled extensively in the 80s and 90s listening to and influenced by Asian, Arabian, South American, African, and French folk music. Their debut CD Soudain l’Éléphant is an ethno-folk-progressive amalgam of finely crafted and recorded music. The opening song "Suerte" is a slick new-age piece along the lines of Weather Report without falling to the excess of Kenny G. The music significantly improves after "Suerte" alternating between bucolic guitar pieces evoking Pat Metheny and jazz fusion in the style of Chick Corea. Highlights of this album are the Arabic influenced "Udaï," the slow moving and eerie "Little Desert Hotel," and the King Crimson experimental stylings of "Le Chat Noir." Soudain l’Éléphant is another excellent Musea release and sure to please a wide audience. One little glitch in the packaging is a handwritten poem printed in reverse on the inside cover of the CD booklet. By scanning and inverting the page I was able to decipher most of the writing:

An elephant has his ivory
So I have in my mouth precious goods.
Purple death!...I buy my glory
At the price of melodious words.
- Apollinaire

This poem is undoubtedly an explanation of the album title. baG is a band to watch.

This French instrumental five piece of guitars, bass, keys, winds and drums plays music in a somewhat jazzy vein, yet with a rock flair and a multitude of influences ranging from world jazz and Arabic themes to folk stylings and new-age. The result is a very soothing yet energized music falling somewhere between early Ozrics, Joaquin Lievano, and Material's Hallucination Engine, perhaps with flashes of influence from Pat Metheny, Alain Markusfeld, and others. Primal exotic percussion abounds in almost every tune, as well as heavy and moody atmospherics, didjeridu samples, bagpipes, and other interesting wind-synth textures. One can't help being captivated by the variety and refinement of the compositions and arrangements as the band works their way through the album's eleven tracks, mostly in the four-to-five minute range. Yet the music here is not overly complex or busy on the nerves, instead being more laid-back and melodically oriented. All in all, this is an outstanding album by what seems to be one of France's most promising new bands, an album that grows on the listener, slowly revealing itself with each repeated exposure.