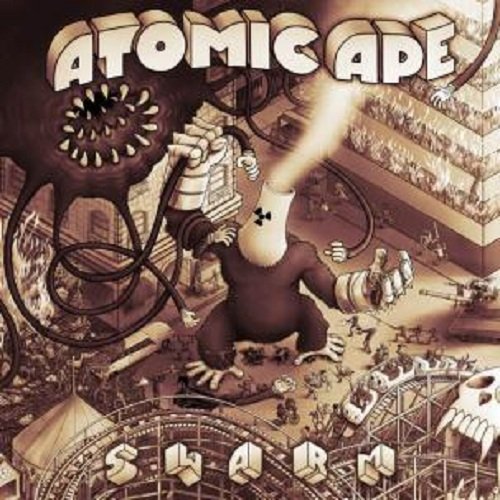 Led by composer, producer and multi-instrumentalist Jason Schimmel, also a current member of Secret Chiefs 3, and formerly of Estradasphere and the short lived Orange Tulip Conspiracy, Atomic Ape picks up more or less where the latter band left off. The eleven tracks herein represent a twisted ride of genre-bending instrumental rock blended with influences from around the globe, and the players seem to be having a lot of fun doing it. Nothing is off limits here, although I have to say that the metal extremities and general weirdness one might have found on a typical Estradasphere album are toned down and refined into something far more enjoyable. Joining Schimmel are many of his former bandmates from throughout the years: Estradasphere alumni Timba Harris (violin), Adam Stacey (keys), John Whoolilurie (sax), and Lee Smith (drums) are all here; also on board are Trey Spruance (guitar) and Eyvind Kang (viola) from Secret Chiefs 3. Percussionist Danny Frankel, bassist Devin Hoff, and numerous other outstanding instrumentalists contribute to this wild ride as well, with just about every instrument imaginable being represented, track depending. Most of what’s here is fast paced and energetic, brimming with brilliance. Jazz and big-band stylings make frequent appearances throughout, with touches of Euro-ethnic folk and middle eastern themes. One might hope that, unlike Orange Tulip Conspiracy, Atomic Ape lasts for more than a single album. But if it doesn’t, so be it. Swarm is a powerful statement by any measure.