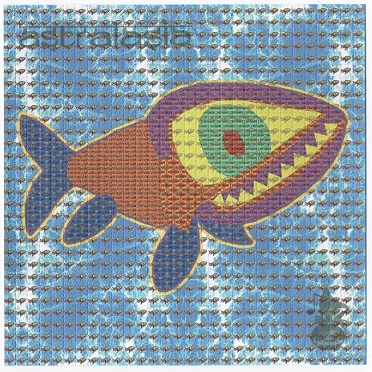 After Astralasia’s 2014 Fruits de Mer double LP Wind on Water sold out, which tends to happen with many FdM releases, Astralasia went back to the studio to produce another batch of music worthy of a double LP release, resulting in Oceania. The 80 minutes of new music spans 11 tracks across four sides, each track offering a different vision. The opening track, “Alooland,” is meditative ambient floating music you can chillax too after a busy day. “Ghosts Inbetween” is primarily electric piano with cascading notes driven by pulsating sequencers that made me think of “Riders on the Storm.” The excellent title track is an abstract Tangerine Dream-influenced track with surf sounds, whispered voices, and Edgar Froese guitar-hero riffing. “Tangerine Skies” is another ambient piece with wave upon wave of sound, slow electric guitar delays, and revebed female moaning that will take you on a voyage into deep space. Then there is the 80s New Age “Kaleidoscopic” that fits in well with Hearts of Space programming and star gazing parties. On “North Star” Astralasia adds a new element to their sound, sustained and reverbed saxophone. This is a long soothing track that sounds like improvised sax over a bed of analog synths. The second LP opens with the predominantly rhythmic track “Astral Voyager.” Astralasia then switches things up again with “Ishdan,” a slow mid-Eastern themed track with a ton of slide guitar. Following “Ishdan” is the abstract and experimental piano sketch “Mushroom Heartbeat.” There does not appear to be a discernable pattern or structure to the rapid keyboard runs interspersed with quiet spaces. Even at 4:34, this track is a mite too long. Its saving grace is the bass sequencer, Mellotron, and whispered female voice that surprisingly enter for the final 60 seconds. The shortest track of this set is the 2:32 “A Long Shore” with reverbed sax and electronic washes. And then Astralasia wraps up everything with the side-long abstract and hypnotic “Time & Tide Eternal.” It is so easy to lose yourself in this final track that you can drift off and not even realize the passage of time. All in all, another outstanding Astralasia release that is sure to sell out fast after its April 17, 2017 release if it has not already done so. And to make things more collectible, FdM is releasing in June 2017 a very limited special edition of 200 special colored vinyl sets that include an exclusive CD of Astralasia’s last live ablum, a 7” white label disc containing two tracks that could not fit on the double LP, and a poster.