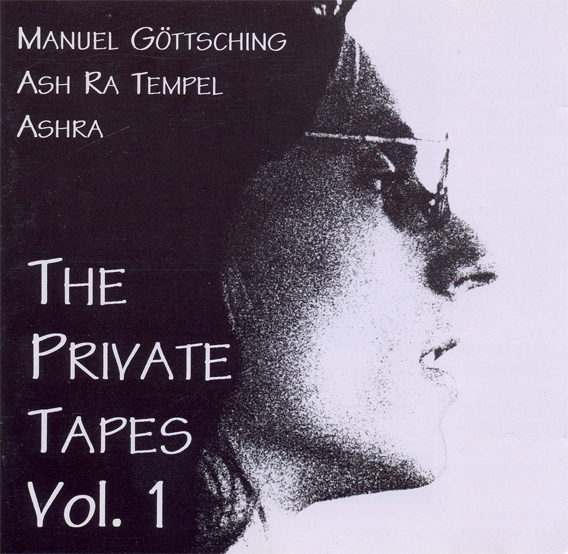 Germany — 1971 — Underground. Those three terms evoke images of the Berlin Wall, intensity, angst, freedom. And no band helped define this milieu more than Ash Ra Tempel. With a long overdue interest in German underground rock reaching a fever pitch, aided along by Julian Cope’s Krautrocksampler, Manikin records, in timely fashion, has released six CDs (each over 70 minutes long) of unreleased material from the vaults of Ash Ra Tempel’s guitarist Manuel Göttsching. The time-frame represented in these historical recordings are from the bluesy, pre-ART group, Steeple Chase Bluesband (1970) to the modernistic, electronic Ashra of 1979.

The immediate question I had, and I suspect many have, is ‘How is the sound quality?’ And the answer is ‘Better than I expected.’ Which is to say that the modern studio recordings (c. 1973) are outstanding while the early live ones (1971, 1973) are recorded, to quote the liner notes, “...with amateur equipment, by an amateur, and probably with just one (cheap) microphone.” In reality, these recordings sound better than that quote may imply.

Instead of assembling the titles in chronological order, the producer decided to place a mixed assortment of studio and live material from 1973-79 and then throw on one live song (at a length of at least 24 minutes) from either a 1971 or 1973 concert. The producer probably wanted to go for the “Wow” factor here. It would be too much to cover each individual piece, and since I believe the music contained over these six discs can be broken into six different periods, I will give an overview of how those styles are represented here.

1976 Gottsching (Vol. 2, 2 tracks; Vol. 5, 1) — Manuel Gottsching on synths and guitar. Correlates to the album New Age of Earth. Probably the least interesting era as this is almost pure electronic music with very little of the trademark and defining guitar that makes Ash Ra’s music so alluring. All three tracks are between 18 and 21 minutes each.

1973/74 Gottsching (Vol. 1, 1 track; Vol. 3, 4; Vol. 5; 2) — Manuel Göttsching on guitar, keyboards, percussion, and voice, Lutz Ulbrich on “Schwerer Dino” with guitar and keys, and Manuel’s long time girlfriend Rosi plays harp on “Begleitmusik zu einem Horspiel.” Somewhat represented on Join Inn (‘Jenseits’ side), Starring Rosi, and Inventions for Electric Guitar. To the reviewer, this was the most revelatory portion of the discs. The 75 plus minutes represented here show us a side Manuel never let loose on vinyl. The haunting yet serene keyboard layers, combined with some incredible echo electric guitar, create a web of emotions unlike anything I’ve heard. Brilliant. There are also a couple of light psychedelic ditties that are similar to Starring Rosi.

1973 Ash Ra Tempel live (One track each on Volumes 4 and 5) — Göttsching on guitar and electronics, Hartmut Enke on guitar and bass, Klaus Schulze on drums, guitar, and electronics. Similar to the ‘Freak ‘N ‘Roll’ song on Join Inn. ‘Ooze Away’ clocking in at 28 minutes along with the 40-minute ‘Dedie a Hartmut’ are the representatives for this period. A reunion concert that is loose, almost West Coast jamming. While it lacks the intensity of the original it still packs quite a punch. Hartmut Enke quit both music and, in a manner of speaking, life after these concerts. Of course, Klaus Schulze continued on to a very successful solo career that is well documented.

1971 Ash Ra Tempel live (one track each on Volumes 2, 3, and 6) — Göttsching on guitar, Enke on bass and guitar, Schulze on drums. Represented on the eponymously-titled first album, in particular the composition ‘Amboss’. With this period we have the CDs raison d'être. This is Ash Ra Tempel at its finest. Each song begins with Enke and Göttsching echoing their guitars slowly to build a deafening crescendo. Without warning, Schulze begins his definitive piledriver drumming pattern, and Göttsching complements this with some of the most intense psychedelic heavy guitar ever recorded. And since one of the pieces is over 54 minutes long, get ready for jams to end all jams. The whole effect just exudes a frantic and intense atmosphere. Yes, it’s Germany, 1971, Underground. Amazing.

The aforementioned Steeple Chase Bluesband (represented here by one 10-minute cut) and a couple of short, German language interviews, round out the collection.

These tapes were compiled and produced by Klaus D. Mueller, who was once an ART and Agitation Free roadie and is most known as Klaus Schulze’s business partner and confidant. His first-hand account of these groups helps him provide us with some very interesting liner notes including a detailed history, personal insights, interviews, old performing schedules, and many photos. So all said and done, this limited edition of 1000 copies is an absolute essential purchase for Ash Ra Tempel fans as well as Krautrock aficionados all over.