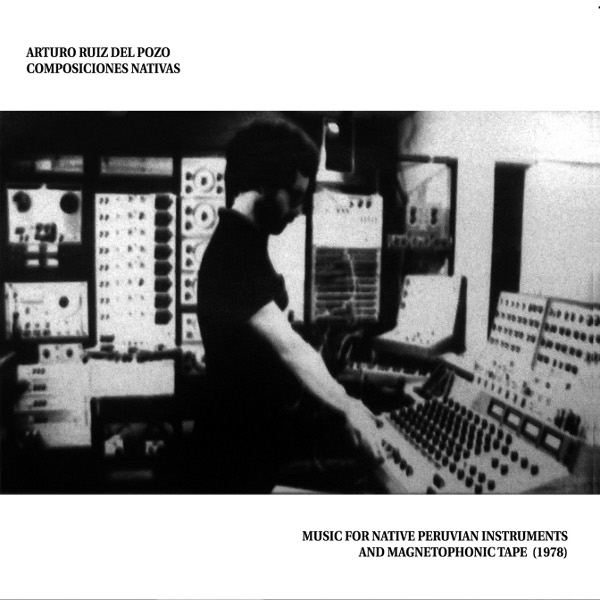 At the end of the 70s in Peru, a new musical concept was starting to come together that combined the instrumental traditions of ancient cultures in new ways, incorporating electronics, tape manipulation and much more to achieve an avant-garde presentation of these new ideas. Arturo Ruiz del Pozo was a pioneer in this movement, a composer who had studied at the National Conservatory in Lima, and later traveled to London in 1976 to study at the Royal College of Music where he received a master's degree in electronic composition. Before traveling to the UK, he packed a bag full of Peruvian native instruments with the idea of utilizing them in his compositions in the future. These opened a new field of sonic experimentation; collages of sounds featuring Andean instrumentation, echoes, and abstractions, which will entrance the listener in an unprecedented sound universe. These recordings were named Composiciones Nativas, and they were released on cassette tape format in 1984. Numerous techniques from musique concrète, such as loops (repetitive tape fragments at that time), variable speed playback, superimposition of several channels during recording, polyrhythms, polytonality, unpredictable mixing of melodies, rhythms, textures, etc. all produced randomly, microtonality, and with elenents of tape echo and reverb, combined with techniques like free improvisation, classic and twelve-tone harmony, and more, all used in a coherent sense trying to achieve a unifying style of conceptual work that arose with all the spontaneous enthusiasm during that course of time. Thirty years on, Buh Records rescued these recordings to inaugurate its “Essential Sounds Collection,” dedicated to publishing strange and fascinating artifacts of Peruvian experimental music from this period, The LP release adds two additional tracks to the original five. For the CD release two additional lengthy tracks of over eleven minutes each are included, “D” and “Kanon Expansivo,” and unlike the other avant-garde sound sculptures that precede them, these are chamber music works, the former for strings and the latter an octet for strings and woodwinds. The CD showcases two completely different sides of Ruiz del Pozo’s instrumental works, a fascinating look into both the unconventional, and somewhat more conventional sides of his compositions.