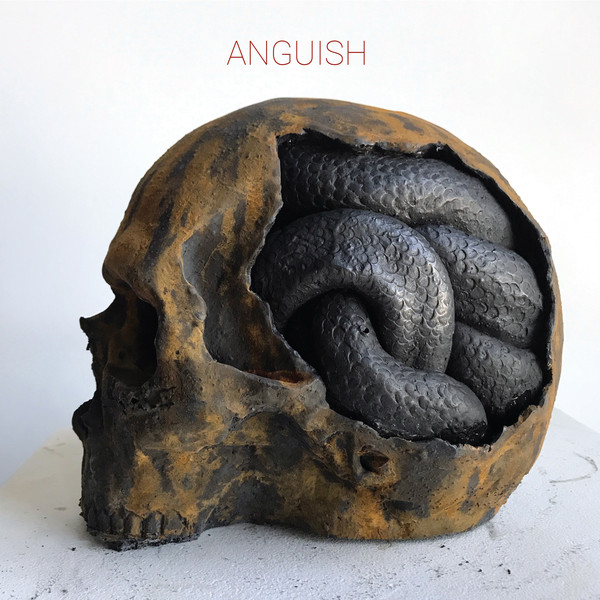 Writing for Exposé, I’m pretty used to albums that are difficult to describe. We come across a lot of music that stretches boundaries, combines elements of different genres, and is sometimes just plain weird. Anguish certainly exhibits all of those qualities. The personnel consists of two people we’re well familiar with: saxophonist Mats Gustafsson and Faust founding member Hans Joachim Irmler. Added to that are drummer Andres Werliin, who is with Gustafsson in the group Fire! and guitarist Mike Mare, who is in a group called Dälek with vocalist Will Brooks, also known as MC Dälek. I would hesitate to call Brooks a rapper, since his words, while spoken rhythmically, don’t have the kind of rhyme and flow normally associated with rapping — it’s more like intellectual poetry slam performance. The music features a mixture of acoustic and electronic sounds, sometimes inundated with noise and distortion, sometimes more atmospheric. Never are the beats programmed or repetitious like standard hip-hop — this is avant-jazz infused with funk and krautrock experimentation. “Disregard your sixteen bars, refuse to keep schedules,” says Brooks on “Gut Feeling,” describing his intention to break out of the confines of hip-hop standards. I know a lot of fans of experimental and progressive music who have an aversion to rap, but I would encourage them to get past that and listen to Anguish with open ears. Hip-hop has been around for decades now, and it’s not going away; like any genre, it has practitioners who are ordinary, following all the rules, and others who strive beyond the rules. Anguish follows on from the tradition of spoken word in jazz, going back to The Last Poets and Gil Scott-Heron, applying those ideas to contemporary techniques of sound manipulation.