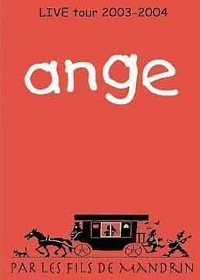 I guess this is Ange. That's what it says on the box, though I can easily see that Christian Décamps is the only member of the band present from the band's heyday in the 70s. He's even got a female singer as a foil for his dramatic singing; and his son Tristan, who plays keyboards, sings as well. In any case, they run through the Mandrin album in its entirety before moving on to a selection of other tunes, all from the band's later years. I suppose this gives the band the best of both worlds: enough classic material to please oldtime fans and enough recent material for them to feel they're not has-beens. Tristan even gets a solo spot with the piano ballad "Le Bal de Laze." The only real weak spot is the drum solo, which while well played, brings the interest to a slump unsalvageable by any number of fancy editing tricks. Caroline Crozat's voice complements Décamps nicely, matching drama for drama, and they also do spoken dialogs. Guitarist Hassan Hajdi is a good player, though at times I find his style a little too much straight-ahead rock for music this complex. The video is very well produced and edited, a very professional job all round, and I can certainly think of worse ways to spend two hours of your life.