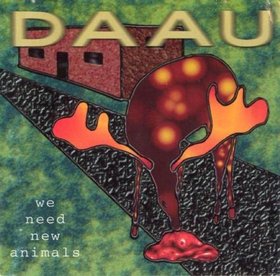 Under this rather long and cryptic (!) name [Die Anarchistische Abendunterhaltung] is hidden a Belgian band operating in the same areas as Cro Magnon, Maximalist!, Ensemble Nimbus, Miriodor or Palo Alto (a new album out on Gazul label). After a very positively welcomed first eponymous opus in 1996, they have moved from an obscure label (Lowlands) to a sublabel of Sony Music. This rather surprising move has in no way affected their musical integrity and this second release feeds us with the same successful mixing of some East European influences played with a peculiar madness and delighting originality. The band lays the emphasis on the string section (violin, cello) and incorporates some folk-ish elements, thanks to their use of accordion. The main difference in this new album is only the appearance of some electronic parts (keys and samplers) which are not of the best effect but which are always very lightly used, so that they do not weaken the original music. The guest appearances of two female vocalists for two tracks is another new element which, once again, has no real interest, maybe just that of making the music more accessible for a mainstream listener. However, despite these minor additions, DAAU (this is their new name) is a young and brilliant band from the North European area, and is definitely worth checking out.