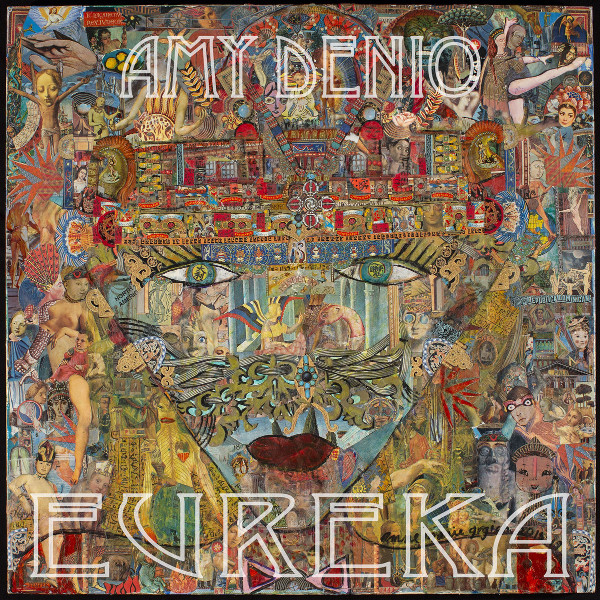 Amy Denio is a musical (as well as linguistic) polyglot. Her music has taken her around the world, with frequent trips to Eastern Europe, and she has absorbed language and culture deep into her psyche. Eureka is her most diverse solo release yet, a collection of 18 songs sung in a variety of languages with instrumentation and vocals mostly by Denio herself. Quite a few of the tracks have a strong Balkan influence (“Pozdravko Kolo,” “Petoljubac,” “Sretan Ruže Dan,” and so on), featuring accordion, clarinet, saxophone, and stringed instruments including her beloved brač. Other instruments include guitars, bass, and glockenspiel, and the arrangements are never overdone. A few tracks feature percussion, both natural and electronic. Aside from the Balkan flavor, hints of Celtic folk music show up, with “The Meeting of Foes” and “The Artist Meets the Mountain Man” sounding a bit like Irish folk dance music. The overall impression is friendly and accessible, whether the mood is melancholy or cheerful. She has the knack of creating music that is sophisticated, experimental, and artistic but is readily understandable without sounding like watered-down pop. When the lyrics are in English, they’re often whimsical, as on “I Want All Beer Cheez,” “Mercury in Retrograde,” “Venus Envy,” and “Stickney the Crater,” which tells the story of how the Phobos crater got its name and has a surprising connection to Denio’s family. Amy Denio manages to do an impressive job at every musical task she attempts, and Eureka is another winning addition to her extensive discography.

Elka Atanasova - Winds of the Rhodopes – Back in the early 90s, when the Bulgarian Women's Choir was making the rounds, a diminutive but fire-breathing 19-year-old violinist from the same country released this promising debut work. How...  (1999) » Read more