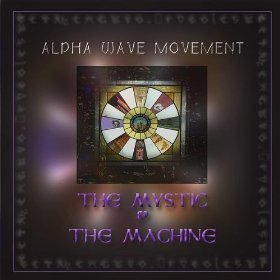 A one man band sounding for all the world like a power trio from the mid 70s, Greg Kyryluk, joined on four tracks by Steve Hillman (not Hillage) on guitar, has hobbied through a convincingly nostalgic set of licks on everything from Quatermass to Still Life: no great distance along a well- traveled road, but a road that at least connects to some interesting side streets. As predictable as it all proves to be it’s probably best to listen to these nine tracks as an hommage to the countless prog-rock me-tooers that filled out the release calendars of a hand full of labels from 1970 to 1975. Dressed up with some electronics and synthesizer waveforms, the music does not qualify as electronic. It’s basically still preoccupied with lots of notes, played real fast, atop some programmed drumming. Kyryluk clearly has an ear for the period he must dearly love, but as nice as it is to know that some high and mid points of 35 years ago can still resonate, The Mystic and the Machine doesn’t really push itself far enough to escape the specific gravity of the Quatermass category and play all the way out to some real space shanties by the likes of Arzachel or Khan.