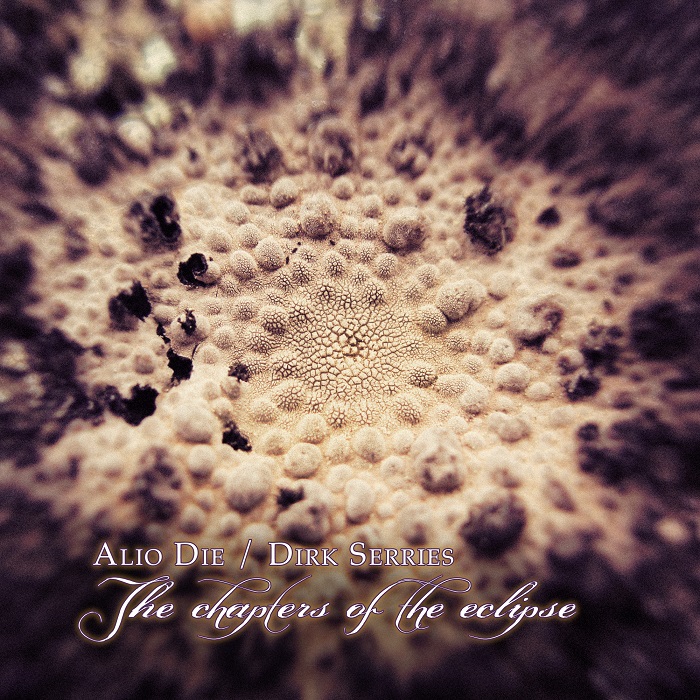 A combination one can’t go wrong with: Alio Die and Dirk Serries. Dirk Serries is a Belgian composer and sound-sculptor we know best from his days when he was releasing albums under the alias VidnaObmana, many a classic like The River of Appearance, Crossing the Trail, and Twilight of Perception, just to name a few. He’s also released many collaborations with the likes of Steve Roach, Asmus Tietchens, Jeff Pearce. Brannan Lane, David Lee Myers, and many others. His previous collaboration with Alio Die, Echo Passage, is a classic of late-90s floating ambient electronics. Alio Die (alias of Italian composer Stefano Musso) likewise has a long history of releasing music, beginning around 1990, with around eighty releases to his credit, including collaborations with Robert Rich, Lorenzo Montanà, Matthias Grassow, Zeit, Sylvi Alli, Amelia Cuni and others. The Chapters of The Eclipse presents a collection of three long-form shimmering dronescapes, a full eight years in the making, imbued with cosmic beauty and majestic radiation, reaching out into space and at the same time finding inward paths of light and shadows, logging a meditative journey in which the listener can reach full contemplative immersion. The opening track, “Without the Light of the Sky, Time Is Lost,” presents a sprawling 24-minute transcendental drift through beautiful layered scintillating sounds based on a soft, spiraling four chord repeating sequence that dances like light from the aurora borealis; each repetition finds alternate layerings of glorious cosmic color, breathing in and out as the journey proceeds. “The Shadow Is Slow, the Hour Is Fleeting” drifts freely through a mesmerizing sonic wilderness, fusing darker colorations into far reaching textures cut from a similar cloth as the opener. “The Sun from the Point of View of the Earth” closes the set with another sidelong piece based on a soft, floating three chord sequence dueling with cosmic drifts of beautiful tonal color, often hidden behind darker shadows as the piece ascends to its conclusion. The Chapters of The Eclipse is a must-have for aficionados of floating ambient sounds — it doesn’t get much better than this.