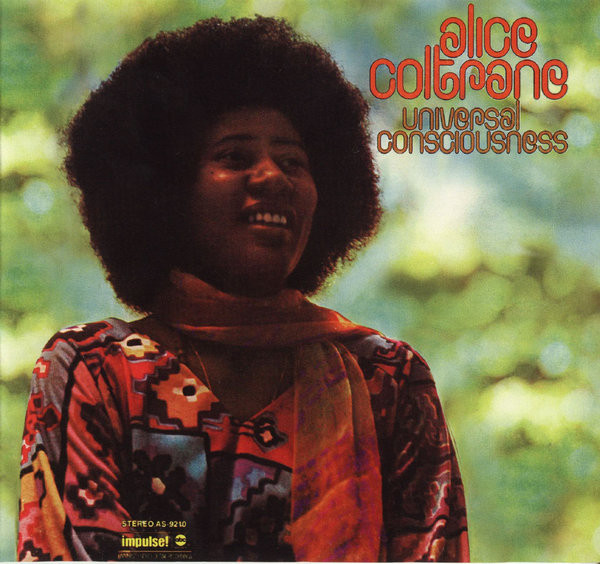 So if there is one quality that ties my various tastes in music together it would be the cosmic quality. It's a hard quality to define, but it's basically a brother/sisterhood of all beings, a sense of unity, a sense of the divine, something spiritual, unconditional love, something that speaks of the vastness of the Universe. It's painted by atmosphere and drone, with a huge sense of space. So I thought I'd start talking about some great cosmic jazz. Counting her collaboration with her husband John Coltrane, Universal Consciousness was harpist and pianist (and organist) Alice Coltrane's fifth release. She started her solo recordings rather introvertedly with A Monastic Trio and Huntington Ashram Monastery before really starting to open up her sound on Ptah, the El Douad. But really Universal Consciousness is something of a unique take on a lot of the time period's tendencies to fuse jazz with orchestration and strings, a tendency she would continue to follow with her next few albums. Universal Consciousness is profound in how it deals with duality, its relationship between moments of quiet meditative beauty and the wheeling cosmic fire in its freer moments. I'm not sure there was much like it at the time even in one of music's most fertile eras of fusing genres together. At times this even exits the boundaries of jazz with Terry Riley-esque organ and lush sweeps of harp. Alice is joined by several jazz luminaries here, Jimmy Garrison on bass, and Clifford Jarvis, Jack DeJohnette and Rashied Ali sharing percussive duties. There's also a rather strong touch of Stravinsky in the midst. It's an incredible vision, like a conversation between mind and soul.