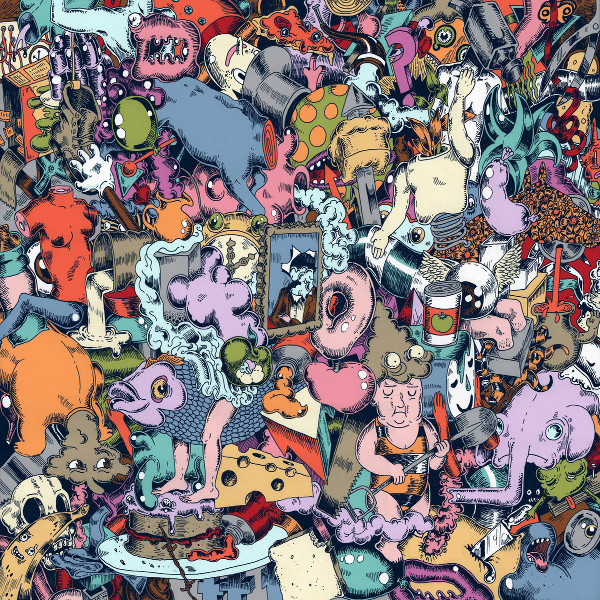 Seems like it was less than a month ago I was writing about Goblinsz…?!, the improvisational collaboration between Alex’s Hand and Ádám Mészáro. Oh, right, it was less than a month ago! But in truth, Künstler Scheiße is something that the Hand has been working on for a long time (maybe since the formation of the band) and finally managed to pull together in all its sprawling, ragged, contradictory brilliance. The jams with Mészáro, enjoyable as they may be, are the kind of casual toss-offs that these guys are capable of, while Künstler is a Major Work with a capital M and W. Comparisons with Frank Zappa, Mr Bungle, and The Mars Volta are valid but don’t really tell you much. Sections of willful and difficult complexity are offset by chaotic improvisation, non-sequitur stylistic shifts, and goofy humorous touches that continually defy expectations. This is epic prog for the attention deficit crowd, building numerous seemingly unrelated sections into lengthy suites and not coming off like some kind of digital collage. This is an extremely talented group of musicians operating in a realm of creativity that might seem far removed from the conventions of rock or jazz or anything else, but has its own internal logic. The Hand’s core of Nic Barnes (drums, vocals) and Kellen Mills (bass, vocals) are joined by long-time guitar accomplices Ben Reece and Max Steiner and a large team of others they’ve gathered together, mostly in Europe, on keyboards, vibes, horns, and so on. Alex’s Hand has produced some good recordings in the past, but they are just preludes to this — not to say they’re now done. This is a seemingly endless fountain of ideas, and from what I’ve heard, they’ve got more in the works already. Every hill they climb is a little higher than the one before, and the territory ahead is covered by fog until you get closer, revealing a still-higher summit. Don’t miss out on this, and if the first listen leaves you baffled, give it another. I’m reminded of a point about creativity that David Byrne made in How Music Works. He said that if composers are exercising unfettered creativity (as many people seem to assume), how come they almost always come up with songs that are in the 3-5 minute range, in 4/4, stick to the notes in one scale, and consist of verses and choruses? Creativity is not unfettered, but bound by conventions most people might not be aware of. Well, I’m betting David Byrne never heard Alex’s Hand. Not much in the way of fetters here.

Richard Johnson and Jud Martindale - Creatures of Habit – For those interested with tracking down the roots of master acoustic fret bender, Richard Leo Johnson, look no further! Uncovered from the independent release catacombs is a 1993 gem from Johnson and...  (2000) » Read more