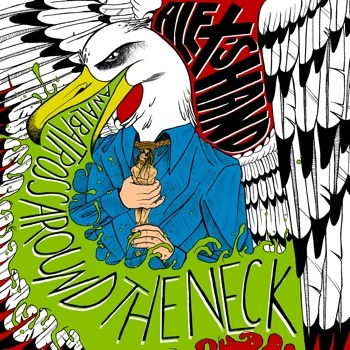 In my review of Madame Psychosis, I wondered what Alex's Hand might get up to next, and here we have the answer. Albatross is every bit as varied as the EP, with some of the same elements along with some others. The Hand's main men, Nic Barnes and Kellen Mills, have crafted another winning set of scattershot style-jumping that probably shouldn't work but does. It follows in the footsteps of Mr. Bungle, Sleepytime Gorilla Museum, and others, namely borrowing liberally from a mind-boggling collection of influences and mashing them together in unexpected ways. They have quite a coterie of collaborators on guitars, keys, saxes, and so on, and manage to strike a balance between chaos and order that often makes me smile. You wouldn't think loose jam-band grooves could mesh with punkish thrashing, metal headbanging, lounge piano, atonal improvisation, and bits of spoken word... and then take a little electronic trip to a Martian Dog Park. Catchy melodies and riffs abound, but don't get drilled into your head by too much repetition. One of the downsides of listening to huge amounts of music is that things start getting predictable – you hear a verse or two and you know to expect a chorus, and in the middle of the track a guitar solo. The complete lack of predictability is what makes Alex's Hand such a balm for jaded ears. Of course, all these styles have been done before, but nobody ever put them together quite like this before.