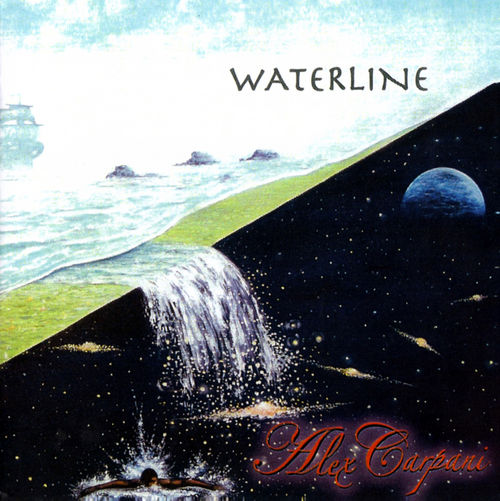 Coming a couple of years after the originally announced release date of July 2005 is Alex Carpani’s “progressive rock” album. I put that in quotes because Swiss-born Carpani, after having been trained in composition and piano at the University of Bologna, has produced a number of albums in different genres. Waterline is his debut of sorts to honor a long loved style. His love of old-school prog may show in his choice of keyboard sounds (and artwork by Paul Whitehead) but nevertheless, he won’t likely be accused of wallowing entirely in the 70s; there’s more of timelessness to much of the music even if hints of seminal bands like Genesis, Yes, and ELP abound. Competent and enjoyable are his playing and compositions, but perhaps as impressive is the ease with which he allows his guest guitarists to take the spotlight. Three guitarists feature at various times including Holding Pattern’s Tony Spada. Whether it’s folk-infused acoustic guitar or the raucous, ripping tone of “A Gathering Storm,” guitar figures prominently and takes the spotlight throughout. The remaining musicians are borrowed from the Cypher Arts’ sister label and bands, Clearlight and Shaun Guerin. It does occasionally have that one-man-band character of seeming rather overly meditated, but overall it’s a pleasant, sometimes delightful slice of instrumental prog with variety in sound while being strong in mood and melody.