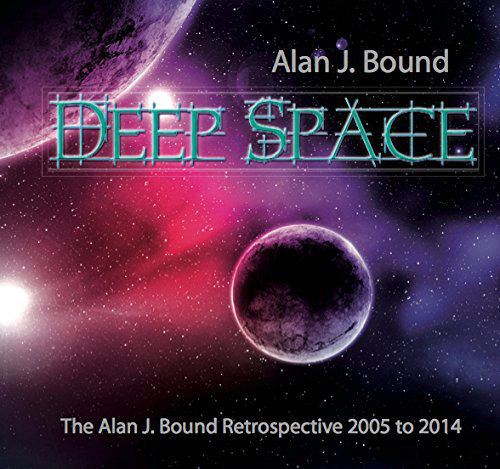 Guitarist Alan J. Bound could never be accused of glutting the market with product, in fact since his debut cassette in 1997, he has only released three further albums, the last two being Moonglider (2006) and Cosmology (2010), with his latest, Deep Space, being a compilation of material – with some remixes – from those two. Based in Cologne, Germany, his stock in trade is extended instrumental guitar workouts in a trio format (guitar / bass / drums, plus Bound plays synth as well) that cross the regions of progressive and psychedelic space rock, with soaring guitar melodies driving the way forward; the synths are pretty much doing their thing in the background, with additional layers of guitars, plus drums supporting, keeping the proceedings moving forward. On the opener, “N365,” one might be reminded of Pink Floyd’s David Gilmour in a more spacerock setting, although as this compilation progresses, there are plenty of reminders of other great guitarists mostly from the history book of German rock, like Michael Rother and John Weinzierl, to name just a couple. This compilation includes four tracks from Moonglider (all remixed) where Janusz Korzen handles the drum kit, along woth a couple different bassists, while the remaining five from Cosmology feature none other than drummer Jaki Liebzeit from Can. “Eta Carina Part 2” is one of the true standouts here, building slowly and steadily over its eight and a half minute duration. While most of the cuts, especially those from the latter album are fairly concise, others seem to just go on and on rehashing the same melody with only minor variations; closer “Float,” at nearly ten minutes, is one of those, and would have been a much stronger piece at four or five. That said, this is still an excellent retrospective of his earlier work, and for this writer, an introduction to Bound’s work. Hopefully he’s got more up his sleeve for release in the near future.