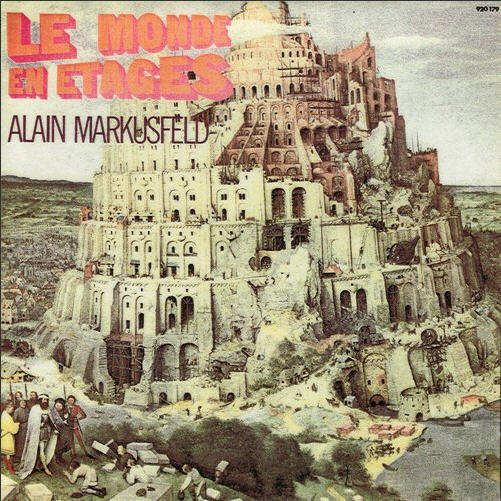 Most, or at least some, may be familiar with the French guitarist’s solo albums released on the Egg label in the late 70s – Le Desert Noir, Platock, and Contemporus, with a 2LP live set rounding them out in 1980. None of those have been reissued on CD to date (although a selection of tracks from the first two were released as bonus material on his latest 2012 release), but most are probably unaware of the guitarist’s first two albums from the early 70s with his band; both are psychedelic rock endeavors of the highest order, of which Le Monde en Etages was the first. Complete with vocals on many of the cuts (lyrics in French), there is a solid Hendrix influence running throughout, as well as hints of the early rock oriented work of jazz guitarist Larry Coryell, and some solid references to early progressive rock on some of the pieces. The band at this point featured Markusfeld on guitars, vocals and compositions; Jean Schultheis playing organ, piano, drums and vibraphone; Jean Claude Michaud on bass guitar; and Bernard Duplaix on flute and sax, along with guest guitarists on two tracks and a different drummer on one of those. Those familiar with his late-70s material, which was primarily acoustic guitar and piano oriented, and nearly 100% instrumental, will be quite surprised at his early work presented here, which is in some ways far more conventional insomuch as this is a rock band offering a sound more typical of the era in which it was recorded, but exceptional and visionary nonetheless throughout all seven songs presented here. Much more could be said, but this is one that really needs to be heard.