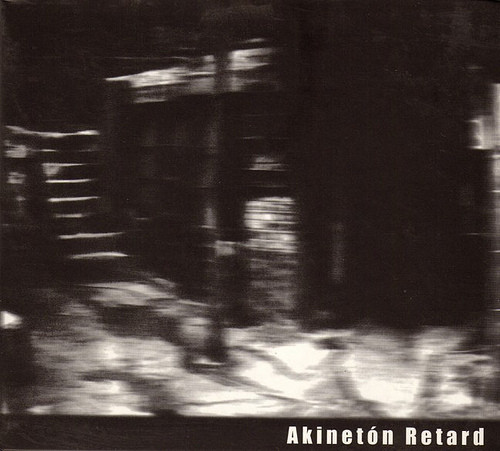 Originally released as Viaje a Erlebnis, the debut album by Akinetón Retard is now available as an eponymous CD on which the band’s five members are listed using assumed names: Estratos Akrias (alto sax, bass clarinet), Lera Tutas (bass), Petras das Petren (saxophones), Bolshhek Tradib (drums), and Tanderal Anfurness (guitar). The disk’s eight tracks present an engaging, edgy, and largely instrumental blast of jazzy progressive rock. Sax, bass clarinet, and electric guitar are the lead voices here, with two instruments often being used to state separate melodic lines or to solo while the third lays down chords or joins the drums and bass in providing rhythms. Although the band seems to be working towards its own distinct style, many different influences are evident here. There’s a Crimson feel (à la “21st Century Schizoid Man”) on several tunes — especially on the CD opener “Copehaguen Schtorba.” More often, the material here seems comparable to melodic RIO. (I’m especially reminded of Miriodor’s Jongleries Elastiques — but with more guitar distortion and a few longer compositions.) There are intermittent moments of half-screamed, half-chanted vocals (usually in nonsense languages) that don’t add much to the excellent instrumental arrangements, but they’re generally few and far between. The only sleeper track on the disk is “Blues en re,” a competently done jazz-blues number — but one which lacks the compositional adventurousness and angular edge of the others. All in all, this is an impressive debut that leaves me eager for a follow-up.