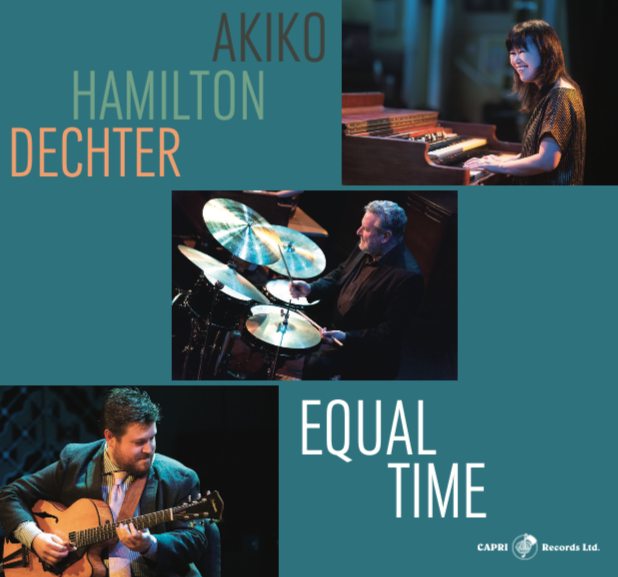 With Equal Time, this trio creates a serious yet fun jazz sound with a simple trio of organ, guitar and drums. Drummer Jeff Hamilton is a veteran player, in addition to his work with the Clayton-Hamilton Jazz Orchestra and the many recordings of his own trio, he has supported Woody Herman, Count Basie, Ray Brown, Ella Fitzgerald, Oscar Peterson and many others. Guitarist Graham Dechter has been a member of the aforementioned Clayton-Hamilton Jazz Orchestra for many years, as well as working with Wynton Marsalis, Elaine Elias, Nancy Wilson, Jimmy Heath and others, and has a couple recordings to his own credit. Organist Akiko Tsuruga relocated from Osaka to the USA at the recommendation of drummer Grady Tate, and has since gone on to release over half a dozen releases under her own name, the latest So Cute, So Bad from 2017 features both Hamilton and Dechter. There is a musical telepathy between them that underscores their shared passion for swing, drawing on the tradition of organ trio pioneer Jimmy Smith. "Mag's Groove," one of Akiko's originals opens the proceedings and sets the tone for all that comes after, illuminating a powerful composition with plenty of brilliant guitar and organ solos throughout its six minute trajectory. Dechter's composition "Orange Coals" is up next, a more nimble swing approach with plenty of stylish guitar drive, the busy bass lines coming from Akiko's foot pedals while Hamilton takes a drum solo in the piece's concluding minutes.The appropriately titled "Osaka Samba" is another Akiko original which gives a lot of space to all three players to stretch out. There are a number of covers here as well, the classic "I Remember You" which has been done by everybody and their brother over the decades, but this arrangement is like one you've never heard before. Similarly, the album closer "This Could Be The Start of Something Big" written by Steve Allen, but covered by numerous artists including Ella Fitzgerald, Aretha, Ocar Peterson and Count Basie, offers probably the most familiar tune but its arrangement is a stylistic continuity of the seven tracks that come before it. John Coltrane's "Moment's Notice" from the late 1950s has become somewhat of a standard over the years, and the trio's treatment of it gives Dechter ample room to improvise while Akiko and Hamilton hold down the backing tune and rhythm. This is a great album beginning to end, and I only hope that Equal Time is not a one-off and we here more recordings from this trio in the future.