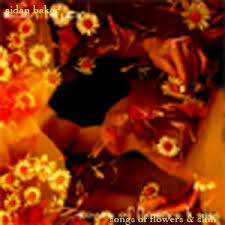 Amid the bulk of BLR releases, to which such adjectives as “noisy,” “chaotic” and “abrasive” are regularly applied, it’s easy to forget that there’s a prominent thread of quiet, introspective songwriter releases as well. Brunnen (reviewed elsewhere this issue) and Aidan Baker are two examples. Like the Brunnen, this CD consists of older material repackaged and reissued. Misty atmospherics, breathy vocals, and minimal instrumentation are the main factors with this Canadian artist, but unlike Brunnen’s keyboard-and-voice arrangement, Baker often utilizes a more band-like lineup, with guitar, bass, and drums all self-performed (except in one case, which is an even earlier live recording). In spite of the overdubbed one-man-band setup, the music sounds very organic, more like separate individuals than the kind of click-track-in-headphones fussiness you might expect. Partly that’s due to the nature of the music, which is reverb-drenched and a bit morose, kind of like demos for a Projekt-label artist (only with male vocals!). The addition of guest players on trumpet and violin really fills out the sound, elevating the simple tunes to elegiac elegance. But when oh when will labels stop including extra songs as part of the last track after 20 minutes of silence? Completely annoying!