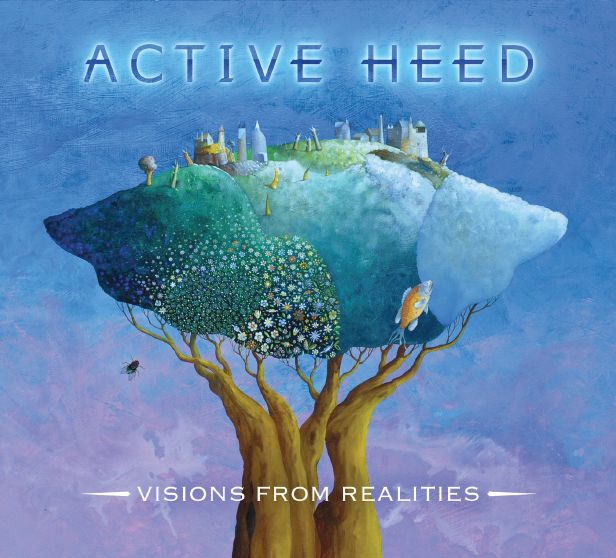 It's been a while since an album struck me so divergently as Active Heed's full-length debut. The opening track, "Flying Like a Fly," while sonically pleasant to listen to, has lyrics that at first seemed like really awkward English written by a non-native speaker. "Flying like a fly / Like if it was my very first flight, / Floating on the floor / In this sunny day." Then I was strongly reminded of Flight of the Conchords — as a parody of pretentious prog-rock lyrics, it works pretty well. The problem with that theory is that on the whole, Visions from Reality seems like a serious work, which puts me back to the first impression. Setting aside the lyrics for a moment, the music is melodic and varied enough to avoid stagnation, with all the players acquitting themselves admirably. Acoustic guitar forms the base of most of the songs, sometimes lending an jangly mood reminiscent of R.E.M., sometimes leaning more to the Classical nylon-string sound. Umberto Pagnini's compositions are nicely arranged by Lorenzo Poli, who handles a lot of the instruments himself; Pellek (Per Fredrik Åsly) contributes the lead vocals; others handle drums and backing vocals. Pellek has a very nice voice, strong when it needs to be, delicate when that's called for, and his accented pronunciation only occasionally mars the listener's experience. The vocal lines are often very "composerly" — giving the impression of having been written on paper without too much consideration of how they would sound in performance: the accents often come at very awkward places in the phrases, and many parts include rapid rhythms that Pellek struggles to keep up with. But don't let these factors deter you — if you're a fan of melodic symphonic prog without rough edges, this is a very enjoyable set of music, an admirable accomplishment.

The Smell of Incense - Of Ullages and Dottles – The passage of time is not always what it seems. Sometimes it crawls interminably and at others it passes in an instant. In the case of The Smell of Incense it is shocking to me that it has been 10...  (2008) » Read more