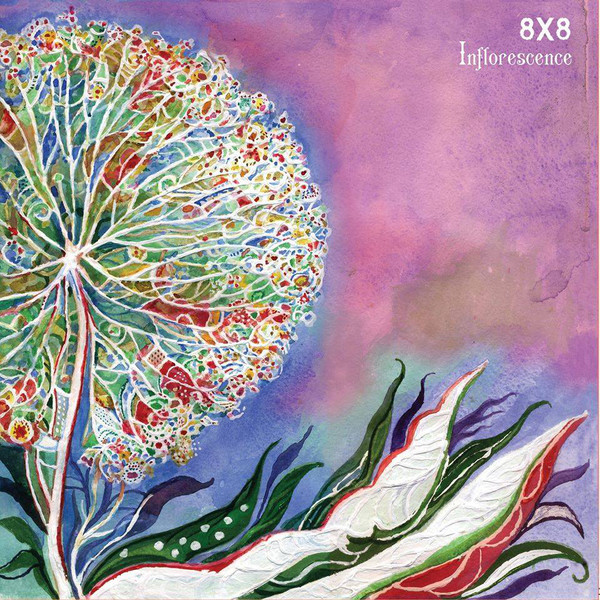 8x8 is the transatlantic collaboration between musicians Lane Steinberg in New York City and Alex Khodchenko in Kiev. Inflorescence is their third album, the second to be released on vinyl. Lane and Alex have never met, nor even spoken for that matter. Their relationship, which began as a series of emails, grew into a working musical partnership, recording the entire album via file sharing. Since 8x8 is a part-time project and done on a small budget, I did not know what to expect. Suffice it to say that after the first few seconds I was drawn into their music and blown away by their magical blend of Beach Boys, Beatles, psych, and progressive rock pop tunes. Now, referencing the Beach Boys and the Beatles does not mean that Inflorescence is derivative music. What I mean is that most of the songs contain Beach Boys style harmonies and some of the songs have that Beatles music hall vibe and megaphone vocals. 8x8's music is uniquely their own. There is also an element of garage rock, like on “The Essence” with its rapid fire drumming and all-out psych jam for the last half of the song. And considering that this jam was done through file sharing makes it all that much more impressive. The Mellotron pops up now and then to enhance the pop psych quality of these songs. There are a couple of Indian-influenced raga rock numbers as well, with “The Six Fifty Three” and its subject matter making me think of "A Day in the Life.” I particularly like the two instrumentals “Head, Heart, & Tail" and “Between the Double Curtain.” Then there is the post-apocalyptic spooky experimental track “Aftermath” that is entirely different from anything else on the disc. This is a great album that has been lovingly assembled across nations and great distances, something well worth investigating.