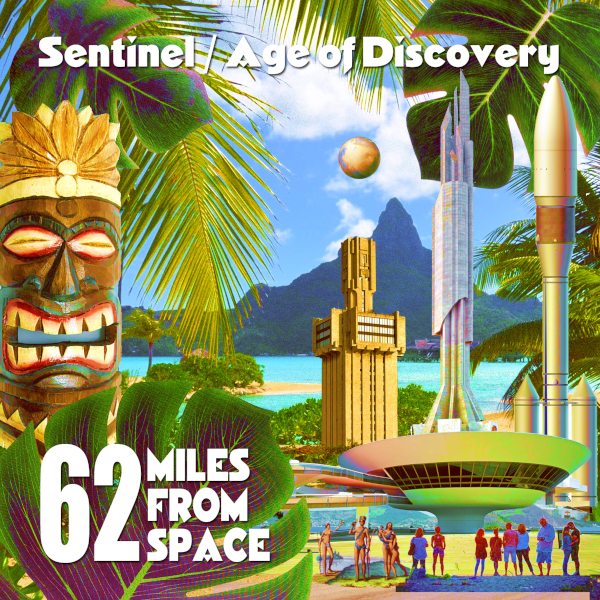 Four years after their debut EP on Mega Dodo Records, the Moscow-based virtual two-piece band 62 Miles from Space returns with their new extended EP Sentinel / Age of Discovery. This new release is ten minutes longer than their debut, clocking in at 26 minutes and spanning eight tracks. Sentinel / Age of Discovery relies heavily on electronics, analog and digital synths, and sequencers. The music ranges from the trippy opening track, “Sentinel,” to the eerie and spooky “20th Century Nauscopy,” which taught me a new word. Nauscopy is the art of detecting ships over the horizon or at a great distance. In between are some cosmic excursions to the moon and the early US space program. The song “Gordon Cooper” is named after one of the original seven US astronauts. The song has an urban feel but also features some air to ground recordings, possibly from one of Cooper’s Mercury or Gemini flights. Another track of note is “Ariane,” named after the European expendable launch vehicles, which has a bass ostinato reminiscent of Pink Floyd’s “One of These Days.” The album closes with “21st Century Nauscopy,” a more mature and experimental track with reversed sounds, electronics, and radio noises to create an amorphous atmospheric floating soundscape. And the cover art is a hoot, a throw back to 60s science fiction movies and fanzines. If you are looking for 30 minutes of fun space music, this new EP might just be for you.