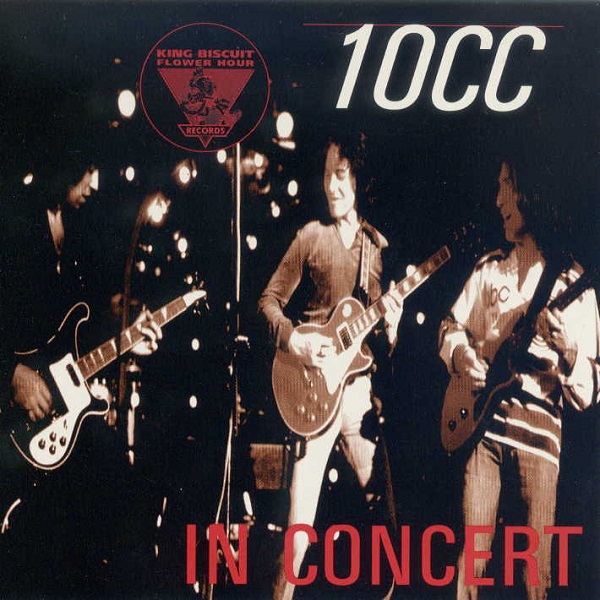 The King Biscuit archives are vast commodity of lost recordings of live bands in action, as they were: warts and all. One of the many missing chronicles in live music history is the early period of 10cc (with Kevin Godley and Lol Creme). Take a step back in time: a thunderous boom launches your concert goer at the Santa Monica Hall (Winter 1975) into a mock voice of God introducing “the Hippy Happy Zippy Zappy” band ready to rock. The progressive pop four-piece (plus drummer Paul Burgess) strike up a ballsy version of "Silly Love," a hit from their 1974 release, Sheet Music. And you're there: hearing a masterful group of songwriters tackling complex music from their amusing and lyrically intelligent first two albums. This incarnation of the band can now be fully appreciated as a quirky, witty, funny band who excelled at meshing vocal styles with parodies of popular music forms (a la Zappa). The live chemistry of this line-up was a hit or miss commodity depending on what night it was (according to comments included in Godley and Creme's later song "Group Life"). But on this night they were in a groove all their own which is both exciting and raw. The most successful songs are two of the most difficult to pull off I think: "Somewhere in Hollywood" and "The Worst Band in the World," where the group gets to rock and shine in the fine tradition of English rock balladry. Hits "Donna" (featuring a doo-wop send up) and "Wall Street Shuffle" also come off well by these innovators, who at the time were criticized as only being a studio venture incapable of live performance. I can gladly state that this was a band I was sorry to have missed in their heyday.