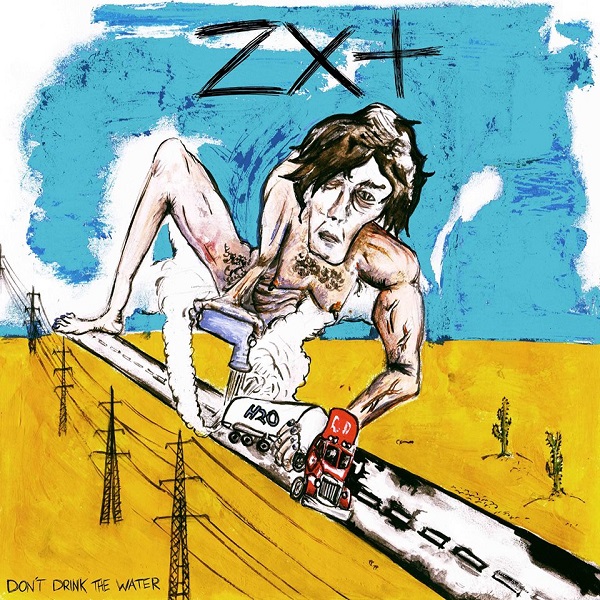 Stephen Evans, AKA ZX+, is another new musician who I first encountered via FdM. He had a crazed cover of Syd Barrett’s "Jugband Blues" on last year's compilation A Momentary Lapse of Vinyl and then a crazed cover of The Stones’ “She’s a Rainbow” on a member’s only compilation released this spring, Strange Fruit and Veg. Now on August 20, Stephen released a full-length ZX+ album Don’t Drink the Water with 13 short songs spanning a total of 31 minutes. There is a touch of pop, a touch of psychedelia, and a bit of rock thrown in for good measure. Stephen plays most everything, but he is joined by Mary Joanna Coogan (backing vocals) and Mark Coupe (drums). Some of these songs are stripped down to the essentials of vocals, guitar, and drums. Others have a bit more fuzz added. The first song that caught my attention is the oddly named “-“ or I guess hyphen. This song begins with acoustic guitar that is then joined by a buzz saw electric guitar lending an Eno-esque vibe from his Before and After Science period. A couple of the other songs reminded me of Arthur Lee and Love, primarily the chord structure and acoustic guitar lines: “Pet Sematary” and the title track. The title track also has a 60s TV Theme vibe similar to “Fireball XL5.” “The Desert” has a very catchy riff and the music lies somewhere between gothic-Western and surf music. “Just Like That” is a slow trippy ballad with acoustic guitar and twinned electric guitar lines. Then we have “The Raven” with the repeated lyric “nevermore” that has some similarity to “Christmas” from Tommy. Another favorite is the beautiful Beatle-esque instrumental “For Him or Her.” One last thing to note is the strange and surreal cover art that borders on the grotesque. Think of it as an extract from Dali’s sketchbook. It reminds me of the cover art on Dschinn’s self-titled album, Dzyan’s Electric Silence, and Klaus Schulze’s Blackdance and Timewind. Overall, a bit of a mixed bag, but nonetheless an enjoyable listening experience.