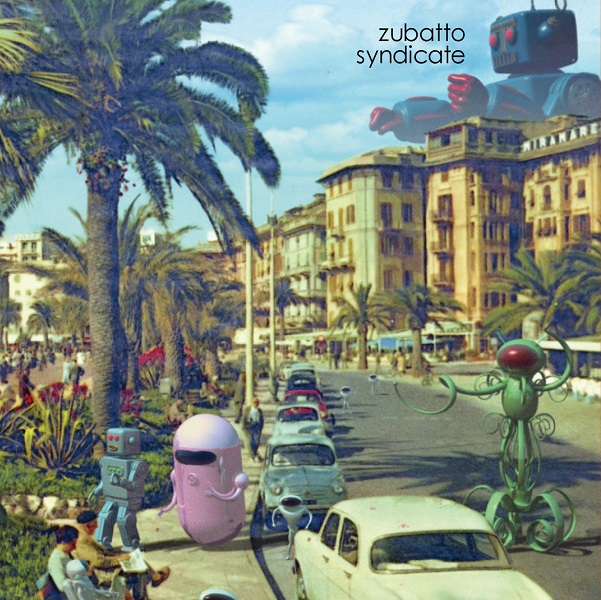 Progressive Big Band? Sure, why not? Composer Andrew Boscardin has assembled a large ensemble consisting of saxophones and brass along with clarinet (of standard and bass varieties), bassoon, oboe, flute, and a rhythm section, and takes his music into the territory near the crossroads of jazz, rock, and modern chamber music. At times, the listener may be reminded of movie soundtrack music, especially movies from the 70s, when filmmakers didn't all go for big orchestra or mainstream rock exclusively. The wonderful cover art depicts a wildly retro-futuristic city scene, with robots and aliens interacting with American cars of the 50s, and the sci-fi theme is carried through to the song titles: "The Trouble with Earth Women," "Mechas over Manhattan," and "A Brief History of Time Travel" are a few examples. Structurally, many of the pieces follow the familiar pattern of stating a melody, instrumental solos, and a return to the head to finish off, but there are many twists and turns along the way. Fans of Frank Zappa's instrumental music should find much to like, though Zappa's fussy rhythmic complexity isn't emulated. In short, Zubatto Syndicate may look like a Big Band, but the music isn't entirely jazz, and the quality of the composing, arranging, and playing merits attention from adventurous music fans.

Robert Rich - Propagation – Rich is one of the more interesting of the "electronic" artists, his music is as much organic as it is synthesized. With a very wide array of flutes of different origins, and the occasional use of the...  (1994) » Read more