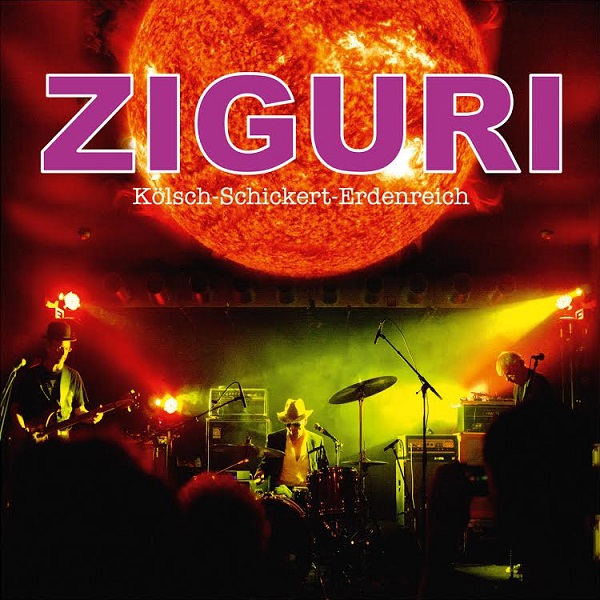 In 1987 Krautrock legend Günter Schickert formed Ziguri with Udo Erdenreich and Dieter Kölsch. They actively performed for 10 years and then went their separate ways without ever releasing any music. As luck would have it, three years ago they decided to reform and today, 27 years after starting the band, we have their debut release, Ziguri (the Mexican Tarahumara Indian word for peyote). Schickert is best known for his solo albums Samtvogel (1974) and Überfällig (1979) plus his work with Klaus Schulze, all of which have been recently reissued. And also of note, Schickert, along with Manuel Göttsching, pioneered the use of echo guitar. These guys have got to be in their sixties, or rapidly approaching them, but you would never guess that from their music. The five tracks were recorded in just three days and the result is a refreshing set of hypnotic trance/Motorik/psych/Krautrock with driving monotonous beats, strong bass lines, served up with Schickert’s floating patterns from his Echodrive guitar. Most of the disc is instrumentals with chanting thrown in from time to time. The opening track, “General Klickman,” immediately locks into a Krautrock groove and after three minutes, they start chanting “General Klickman is in the sky, waiting for you, that you don’t cry.” The bass line is very strong and eventually made me think of Joy Division. The second track “Massa” is pure space rock jam on a par with Öresund Space Collective and Hidria Spacefolk. The third track “Yoyodyne,” pronounced by them as jo-jo-dine, has a heavy tom-tom beat, bass, and chanted vocals that reminded me of Les Claypool and Primus. “Bella Hopp” is an outstanding example of echo guitar with chanting of the song’s title. The disc closes with “Goa Constrictør,” another hypnotic trance Motorik beat song that locks into a bass groove for 11 minutes along with wordless chanting similar to Gong’s weirder moments. All-in-all quite an impressive release.