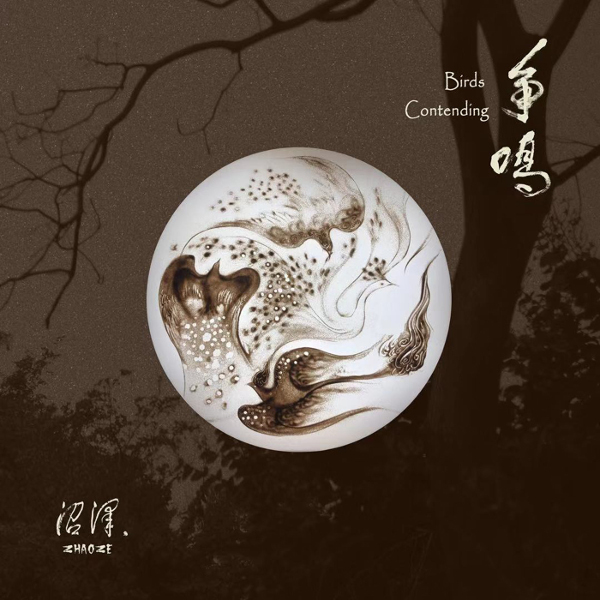 For their newest album, Chinese post-rock band Zhaoze takes their art to a new level, presenting a single piece of music more than 40 minutes in length. It contains all the qualities that have made their last few albums special, with a unique blend of Chinese and Western sounds. Hoyliang’s electric guqin is featured prominently. The guqin is one of the most iconic Chinese instruments, and its fretless nature allows for infinite variation in pitch, tone, and technique — with the addition of non-traditional methods such as bowing, the instrument’s capabilities are extended even further. Hoyliang also contributes xiao, one of the many variations of the flute found in Chinese music. Littledream’s guitar is often cast in a supporting role, with arpeggiated chords, washes of distortion, and long, ringing tones, though he does occasionally take off with a dramatic melody, usually with tremolo picking. There a many passages where the drums drop out, and in some of these, Seasean plays celesta, providing delicate lines to complement the other instruments. Roy’s bass is solid support, rarely drawing attention to itself. The music ranges from calm, meditative beauty to throbbing, intense power, sometimes with a gradual transition, sometimes abruptly, and the entirety takes listeners on a journey through impressive territory, deploying tension and release masterfully to tease emotions out of sound. The massive buildup between 25 and 30 minutes in is particularly awe-inspiring, though they manage to follow it up with a section that changes direction and feel without seeming like a let-down. I will reiterate my contention that Zhaoze is one of the best bands on the planet — their music, in spite of its ambitious length, is both accessible and powerful, and the emotional and intellectual depth is almost without equal. A bit about the name Birds Contending… The Chinese name is 争鸣, which means “to contend” — nothing about birds. But the two characters that make up the word, when taken individually, are “dispute, fight, contend, strive” and “the cry of a bird or animal.” So Birds Contending is a bilingual pun, the kind of wordplay that only works with a language such as Chinese, where words are constructed of parts with individual meanings that may be fairly different from the combined meaning. This is the kind of underlying subtlety and thoughtful cleverness that is also found in the music.

Phil Mercy - Fear of Fantastic Flight – I don't know who Phil Mercy is, but, if I had to guess from what's in the CD booklet, I'd say he's a gifted English guitarist who has always wished for a chance to record the kind of...  (1999) » Read more