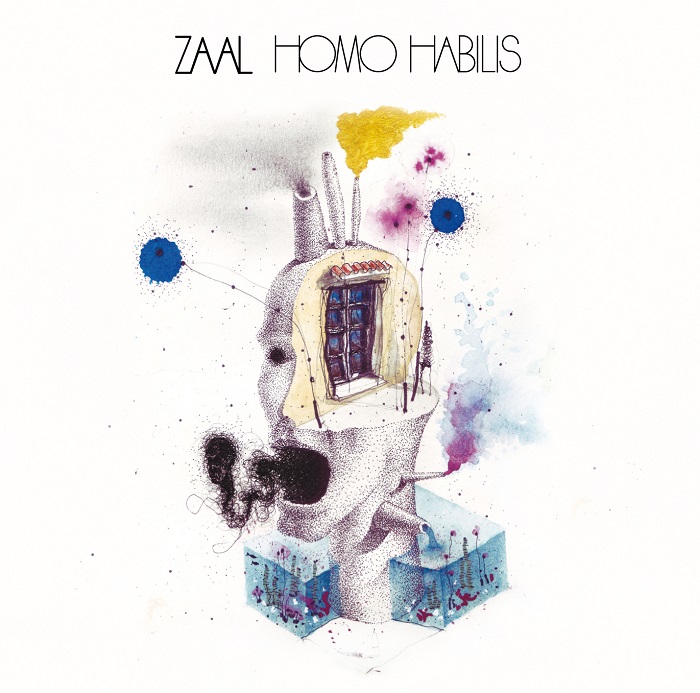 Italian keyboardist and composer Agostino Macor has been a member of La Maschera di Cera as well as other projects and groups in Fabio Zuffanti’s sphere of influence (Finisterre, LaZona, Hostsonaten and others) since the 2000 release of Zuffanti’s Merlin the Rock Opera in 2000. Following Finisterre’s 2003 US tour, Macor created the side-project Zaal with some of the musicians who shared that tour, with a concept of creating a progressive style with a more jazz and world influenced sound. In 2004 their first album, La Lama Sottile, was released on the Mellow label, involving a number of musicians, track depending. Because of Macor’s commitment to Zuffanti’s various projects, which kept him busy in the years since, there has only been one more Zaal release in the interim years, Onda Quadra in 2010. In 2015 work on the latest Zaal release, Homo Habilis began, adopting a more electric jazz and world influenced instrumental sound centered around a lineup of Macor (Rhodes, organ, and synths), drummer Andrea Orlando, electric bassist Pietro Martinelli, Francesco Mascardi on tenor sax and flute, and trumpeter Roberto Nappi Calcagno. In addition, violinist Sergio Caputo (who played on the first album) guests, as well as additional guest players on brass, double bass, and sitar. The sound begins from an electric jazz, ambient, or chamber style at the album’s beginning with tracks like “Meccanica Naturale” and “Revéil (Post Big Bang)” near the album’s beginning, on the latter where Macor uses extended techniques playing the inside of the piano like a harp. Throughout there seems to be plenty of space for improvisation, each player contributing to the collective magic. By the third cut, “Presences,” and the title track, we hear a Miles’ Bitches Brew style jazz somewhat informed by the Canterbury sound and world music influences, with flutes, violin, and sitar making appearances. Following the intensely beautiful one-minute Rhodes solo piece “Jaime S*mmers” the album goes even deeper into world music territory for the Indian inspired “Instruments” and the more experimental “Revéil (Together Project),” which recaps the second cut with more sitars, flutes, and organ. An almost-hidden track, “Androids Void,” closes the album nicely with a touch of electronics mingling with electric piano. An outstanding album, beginning to end.