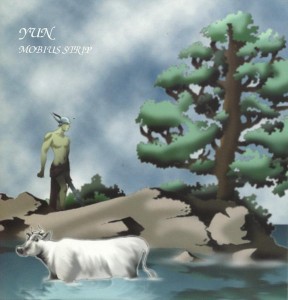 Yun is essentially Korean multi-instrumentalist Jo Yun on guitars, keyboards, and percussion, with a male and female vocalist, and bassist Hyoung-Suk Kang. While other 'progressive' material has come out of Korea in the past (the Mike Oldfield-like multi-instrumentalist Sung Woo Lee comes to mind at first, but there have been others as well), this is probably the first that fits squarely in the realms of symphonic prog, yet even that tag is not totally accurate, as Yun's music is far more multifaceted and unique than that label would normally imply. The symphonic aspect is very lush, built up with many layers of synth; one might be reminded of Lito Vitale's post-Mia album, Tribute, or even The Enid at times, yet these comparisons only account for the textural elements of the sound, and not the composition. The percussive elements herein may recall Island period Jade Warrior and even some of the instrumental works of Osamu Kitajima. Conceptually, Yun draws on western folk, eastern traditional, and progressive rock structures to build lengthy multi-sectional pieces. The seven tracks are primarily instrumental, with voices seemingly added as an afterthought, with lyrics in Korean, as well as spoken parts, hooting and shouting; never do the vocals overpower the music, nor does the music ever seem to exist solely to support them, as might be the case in a more song oriented style. Intense, introspective, and cinematic, this is powerful music that begs for repeat listens. Most should find plenty here to enjoy.

Some mention must be made of the completely overblown gimmick packaging, beginning with an oversized 6x6 digipak that folds apart from the center, creating sort of a cross. In the center, four pieces fold up to create a small pyramid under which the CD and booklet are stored. It's interesting, and unique, with beautiful artwork, but in the end, in the interest of speed and utility, this writer just went and got a standard jewel box to store the disc in.