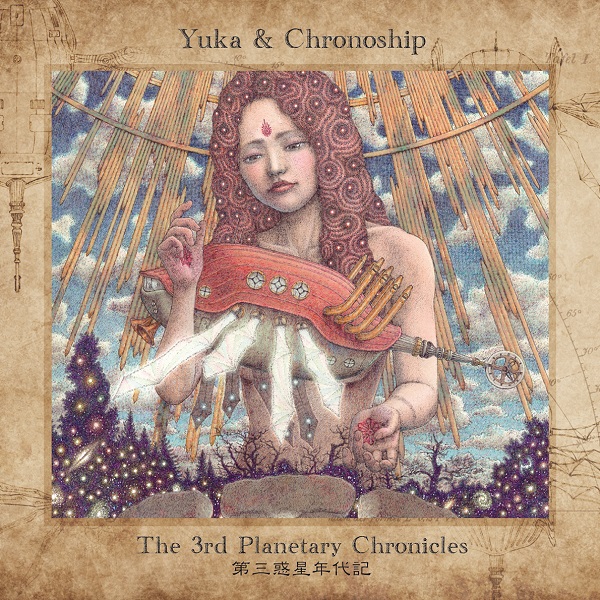 When I first saw the name “Yuka and Chronoship,” it made sense: Yuka Funakoshi is the leader of a progressive rock band, and “Chronoship” has a science-fictional ring to it that works for progressive rock. With this third album, it's clear that “Yuka and Chronoship” is not just a name, but a mission. Yuka is a brave explorer, and the Chronoship is her vessel to travel through time and space, a sort of musical TARDIS. Water Reincarnation gave us a variety of glimpses into the importance and nature of water, which is one of the major factors making the Earth what it is; Dino Rocket Oxygen touched on a segment of Earth’s prehistory (in the “Dinosaurs” suite), the technological present and a bit into the future (“R Is for Rocket”), and the element of “Oxygen,” another important component of our planet. The 3rd Planetary Chronicles makes the grand scheme more explicit, visiting a wide range of points in the Earth's history, from its very birth into the future – basically Chronicles of the Third Planet. In a very nice touch, showing that the concept is not treated too slavishly, the episodes chosen for presentation are not done in chronological order. For example, the four parts of “Birth of the Earth” are spread through the album, providing a recurring musical theme that really makes it all hold together. A short motif on the piano gets different settings and interpretations, culminating in one of the album’s highlights, “Embryonic Planet,” that closes the album with flair and a satisfying grandeur. The music is melodic and powerful, with echoes of past progressive rock but with a fresh attitude. Yuka's keyboards are in the forefront, with piano often at the core, augmented by organs, synthesizers, Mellotrons, and more; but the band is outstanding, whether supporting her or stepping forward to lead for a time. Takashi Miyazawa’s guitar is frequently an integral part of the arrangements, with some outstanding lead lines. Yuka’s vocals are a much more prominent presence than on previous releases, mostly in the form of lush choruses; this is most definitely not a case where vocals detract from great instrumental music. This third album continues the growth seen over the first two – they just keep getting better. The 3rd Planetary Chronicles is one of the highlights of 2015.