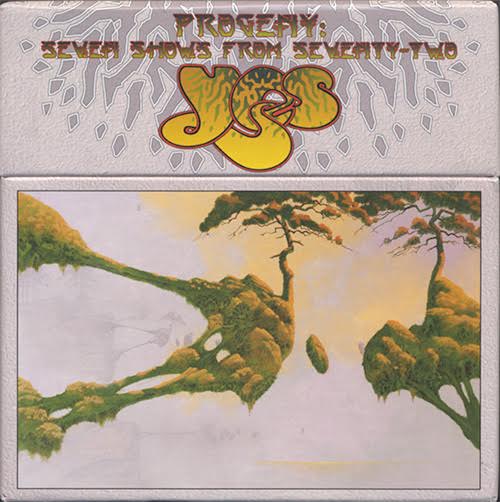 Yes has always been a bit behind the curve when it comes to exploiting their trove of live recordings, but with this set they are catching up. Big time. It started with the archival digging that resulted in The Word Is Live box set from 2005. Those efforts uncovered a stack of 16-track tape boxes deep in the Atlantic Records vaults, which the powers that be relegated for future consideration. As it turns out these tapes — produced during Yes’ summer-autumn American tour of 1972 — were the source masters for 1973’s Yessongs triple-album live set (minus the tracks Bill Bruford played on, which were taken from shows in early 1972, and the tracks that were sourced from the December gig at the Rainbow in London). As they say, timing is everything, and with bands like King Crimson and the Grateful Dead proving that “superfans” will shell out big bucks for these behemoth box sets, a green light was given to undertake the painstaking process of converting 43-year-old acetate into digital (and vinyl) merchandise.

As far as the physical package goes, the relatively compact box is lavishly decorated with Roger Dean artwork, with each concert (two disks each) presented in individually illustrated sleeves. Those who are interested in how this all came about will enjoy the companion booklet that includes producer Brian Kehew’s notes on the myriad technical challenges confronted, ranging from misaligned Dolby noise-reduction units to poorly placed audience microphones to dodgy instrument recordings. Kehew and his entire team deserve high praise for their work, having delivered remarkably clean and balanced recordings that capture the dynamics and firepower of Yes at their peak.

Yes were not an improvising outfit like King Crimson, and the set list (focusing mainly on Close to the Edge which was released as the tour was underway) was mostly the same from one night to the next. For some, hearing the same show seven times will be overkill, and for them Rhino has wisely created a two-disk Highlights version as a sort of “Best-of.” But for serious fans the full box is a must.

One might think that Progeny would make Yessongs surplus to requirements, but if anything Progeny enhances the aura and reputation of Yessongs rather than diminishing it. Listening to these songs in their unadulterated form it becomes clear how much work Eddie Offord put into culling and editing together performances, crowd noise, and even isolated moments to create what became Yessongs. But Yessongs, with its cavernous sound and studio manipulations, will never provide the sense of “you-are-there” that Progeny offers in spades. Some of this is due to the mix that positions the band across the stereo spectrum as if they were playing in front of you (i.e., Jon Anderson and Alan White in the center with Steve Howe on the left and Chris Squire and Rick Wakeman on the right). Part of it is also down to the warts-and-all nature of the recordings that — along with stage banter — includes every technical snag, cracked vocal, and missed cue. The most famous of these is from Toronto when the keyboards actively picked up the local FM radio station and a DJ’s voice could be heard as Wakeman soldiered on through his solo spot.

As tours tend to go, the later shows are the best with an almost surgical precision and attention to detail that leaves the listener drained after the last note of “Yours Is No Disgrace” has wafted into the ether. One can only imagine the effect these shows had on those who were there, but based on anecdotal stories on the Forgotten Yesterdays web site Yes were regularly leaving audiences demolished in their wake. As Progeny proves, the very fact that they were able to consistently perform these songs at such astonishingly high levels of musicianship only enhances their reputation as one of the finest live rock bands England ever produced.