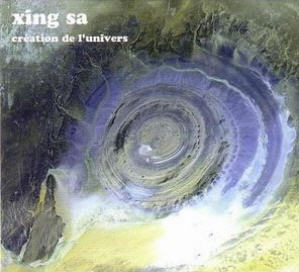 Just based on the record label — Soleil Zeuhl — most zeuhl fans will open their wallet and trigger the purchase. And indeed, fans of that style will not be disappointed, even though as a trio of keyboards (Nicolas Goulay), bass (Christophe Blondel), and drums (Nicolas Candé) this lineup may seem a little lean for the job, but they (along with guests on vocals, chau gongs, and tenor sax) are definitely up to the task. All three are members of Setna (another excellent French zeuhl ensemble), although of late Goulay is making Xing Sa his home. The prominence of Fender Rhodes and Minimoog may remind listeners of certain styles encompassed in the solo albums by Patrick Gauthier and Benoit Widemann, both one-time keyboard players for zeuhl mothership Magma. Other cuts take on a more bombastic, introspective or ambient sound, creating alternate modes of zeuhlian expression. The vocals, where present, are mostly a gentle melodic counterpoint to the keyboards, carrying forward a somewhat heavenly experience. The thirteen tracks here are organized into five suites, each calling to bear different moods and feelings that reflect the creation concept of the title: “Feu” (fire), “Terre” (earth), “Metal,” “Eau” (water) and “Bois” (wood) each bring to mind the origination of their existence. While Création de l’Univers is conversant in the zeuhl idiom, it does at the same time stretch that style out into many new and fresh directions.