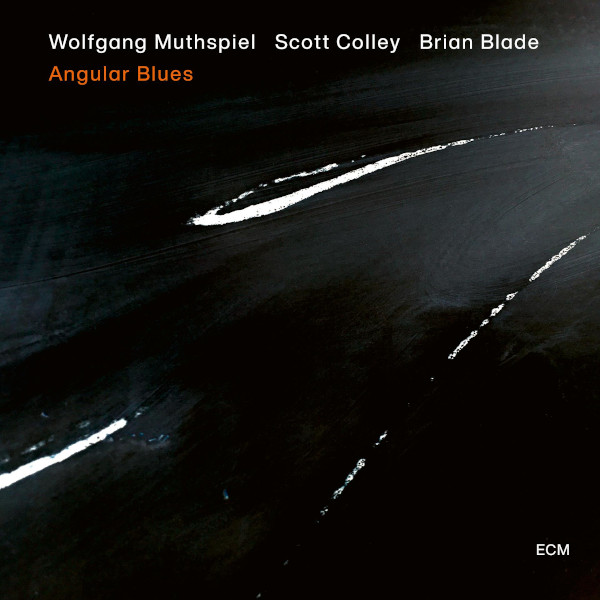 There are so many jazz guitarists in the world that it’s hard for any of them to distinguish themselves. Austrian Wolfgang Muthspiel has a recorded career that stretches back to the 80s, but it was only a few years ago, with Rising Grace, that I first heard him. I’ll admit that album didn’t grab me, but when his newest ECM release came my way, I gave it a chance, and I’m glad I did. Angular Blues features Muthspiel with Scott Colley (bass) and Brian Blade (drums), and starts out with a number of tunes featuring acoustic guitar. The second of these, the title track, is where things really get going, and true to its name, it features an angular melody with unusual rhythms where the trio really shines. Colley’s playing is outstanding, providing both low-end roots and melodic flights answering the guitar lines; his solo in the second half of the tune is outstanding. Blade is subtle and expressive, with excellent use of cymbals, navigating the tricky rhythmic changes without resorting to heavy-handed patterns. Muthspiel’s playing at times reminds me of Ralph Towner with more classical influence, and he occasionally uses chords and rhythms with a hint of latin music. “Hüttengriffe” is a slow, melodic tune which is credited to the guitarist, though it has the flavor of a traditional melody. At first I dismissed it as too simple to pay much attention to, a quiet interlude in the midst of somewhat more energetic tracks, but then one time it just hit me right, sequestered in my home during the coronavirus outbreak on a quiet morning. This hymn-like piece, with its simple chordal structure, is a stunning accomplishment, a reminder that complexity is not required to make an emotional connection. Later in the album, after Muthspiel switches to electric, we get the double shot of “Kanon in 6/8” and “Solo Kanon in 5/4.” The first of these is my favorite of the upbeat tracks on the album, with some great interaction between bass and guitar that mimics classical forms in a modern jazz context. It’s also a great showcase for Muthspiel’s ability to apply polyphonic techniques in a rather un-Bach-like setting. This is followed by his tour-de-force solo performance of a variation on the “Kanon” idea, where you’d swear there are at least two guitarists involved. Also included are a couple of standards (“Everything I Love” and “I’ll Remember April”) which are nicely interpreted, but honestly Muthspiel’s own compositions make the album work for me. There is, apparently, still room for another jazz guitarist in the world who’s worthy of notice.