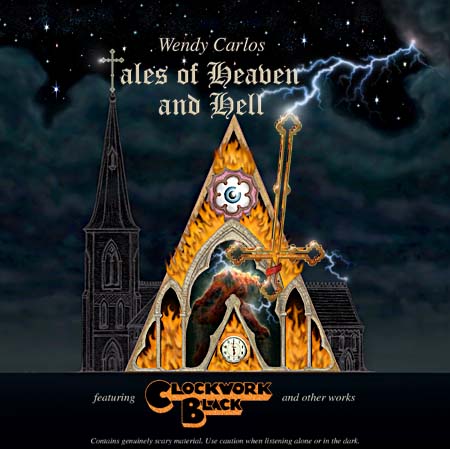 Tales of Heaven and Hell is Wendy Carlos’ new album, somewhat of a self-admitted sequel to her soundtrack to A Clockwork Orange. Wendy is rather underrated for her contributions to electronic music, having had an important role in the development of the medium. East Side Digital is doing a nice job bringing music both old and new to digital reissue. This album is one that causes me some writer’s block, being an album with a wide array of classical influences, a remarkably original work that ranges from the tuneful to the abstract. In line with the electronic experimentation that ranges as far back as the late 60s, Wendy uses instruments from the Rachel Elkind-Bob Moog-Carlos-built Circon, analogous to the theremin, to the modern Digital Performer, to create an album that is dark, unusual, and groundbreaking. She adds elaborate liner notes to explain the album’s concept and each track. The centerpiece of the project is the near-18 minute “Clockwork Black,” which incorporates a wide array of classical themes from the “Clockwork Orange” soundtrack into strange tunings, weird sound effects, voices intoning “We are the damned,” and warm harmonics. There are six other tracks, long ones like the oddly tuneful “Transitional” and closer “Seraphim” to more accessible and shorter tracks like “HeavenScent” and “Memories.” Parts of this album are somewhat academic, its abstraction and pure originality making it difficult to grab onto at times. Carlos is by no means verging conventional in any sense, this is a difficult item of new music.