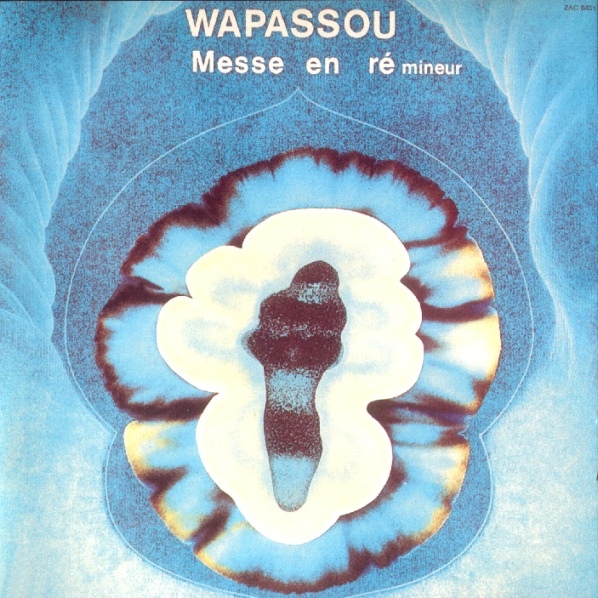 Originally recorded in July 1976 Messe en ré mineur is one of the best psychedelic / progressive releases of all time. This unsurpassed musical tour de force consists of one long song that constantly shifts and changes throughout its 40 minute life span. The music harkens back to the even more ancient music’s of Pink Floyd’s "Interstellar Overdrive" and Tangerine Dream’s cosmic freak-out "Ultima Thule." The interplay of Freddy Brua’s keyboards, Karin Nickerl’s guitar, Jacques Lichti’s violin, and Eurydice’s wordless chanting is exciting and innovative even by today’s standards. This reissue is a must for the adventurous music collector and listener alike. Musea faithfully reproduced the original album art on both the booklet and CD. Unfortunately, if you can’t read French you will be at a total loss regarding the liner notes and band history.

Wapassou was a unique classically influenced French band that existed from around 1971 through the mid-80s (their last release was in 1986). These three — their second, third and fourth albums respectively — represent what is generally accepted as the band's finest material. Their sound could be described as a gentle and perhaps understated symphonic rock, rich with color and cultural influences, elaborate and animated. The lineup consisted of Freddy Brua (bandleader and keyboards), Karin Nickerl (guitars), and Jacques Lichti (violin), plus guests on vocals. Fernand and Gisele Landmann (lights and sound, respectively) were also considered part of the lineup. No drums, no bass. This gave the band its unique character, which could in some terms be likened to Art Zoyd, but with a brighter and more colorful outlook, less angular and more flowing. Messe en Ré Mineur (Mass in D minor) is the most highly regarded of the three, containing one long forty-minute piece (for those who owned the LP version, the two sides have been properly joined) winding through many different themes and melodic developments, with ethereal vocals by Eurydice (no lyrics). It is at once delicate and stunning, a masterpiece of shimmering beauty.

With Salammbô, named for the heroine in the Flaubert novel, Wapassou move boldly forward based on the timeless theme of the stupidity of war. This one features an opening narration, galloping horses, some lyrics (in French) and vocals by Monique Fizelson. Musically, it's a step in a more assertive, less ethereal direction, and again consists essentially of one long suite in two parts, this time split at the sides (there was no fade-out / fade-in on the original LP ).

Ludwig, as might be expected, is the more overtly classically influenced of the three, and uses synthesizers to a greater degree than the previous two, as well as plenty of organs and keyboard bass, and vocals by Véronique Nickerl. Mostly consisting of one long piece "Un Roi pour Eternité" (now fused into one continuous 34 minute track), it also features a short cover of Wagner's "Lac de Starnberg," a shorter track, "L'Adieu du Roi," which features Marc Dolisi guesting on ARP synthesizer, and for good measure Musea has even included a bonus track, the six-minute "Hymne au Nouveau Romanticisme." Three great discs, all highly recommended, although folks addicted to the steady beat of rock drums might be advised to proceed with caution.