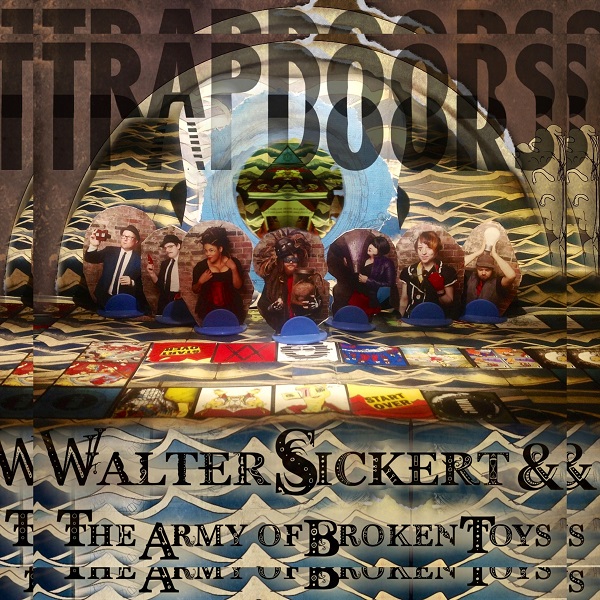 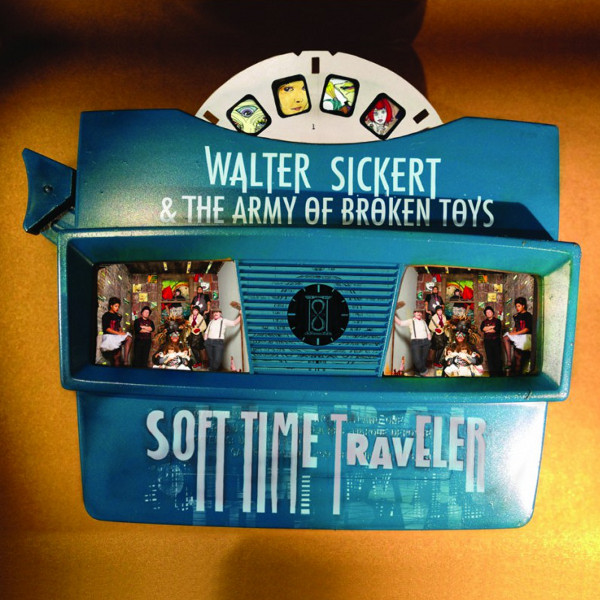 Imagine that a good friend invites you to a party in a questionable part of town, hosted by a mysterious psychic who's predicted that the world will end tomorrow. You're not sure the psychic is right (the world has been looking a bit dodgy lately), but you go along – any excuse for a party, right? Everyone is wearing masks, dressed for the masquerade to end all masquerades, and chemicals are flowing like there's no tomorrow, because there may not be. If the psychic is right, you're going out in style; if not, you'll have a hell of a hangover and some confusing memories, but life will go on. Right now, it doesn't matter. Welcome to the world of the Broken Toys. It was only when I found out that Walter Sickert and the Army of Broken Toys were coming to Seattle that I tried out their music on Bandcamp. I started with Trapdoor, which was the most recent thing available at the time, but I'm going to start off talking about Soft Time Traveler (a CD I got at the show) because it's a better place to begin. You start out with a bluesy acoustic guitar playing a simple riff, shortly joined by a viola quietly going crazy on arpeggios. The sound builds gradually, adding electric guitar, mandolin, and a stomping-and-clapping rhythm part. Sickert starts singing "Devil's in the Details" in a warm, expressive, bluesy voice. Not as gravelly as Richie Havens, but along those lines. It's one of those tunes that manages to be engaging in spite of very simple material. "Survive Songbird" ramps up the energy and complexity a notch or two, with a rolling 3/4 beat and "la-la" backing vocals. Acoustic guitar provides the backbone, and the viola and mandolin fill in interlocking countermelodies; all the while the drums are going crazy and Sickert shows off his vocal chops. The band may have aligned themselves with the Steampunk scene, but on a purely sonic level, I place them more as eclectic New Orleans post-apocalyptic Mardi Gras folk-blues, to invent a genre for them. The combination of instruments is appealing, with all the elements meshing into a wonderful pallette. Rachel Jayson's viola is the flashiest ingredient (she's really a master player, capable of amazing sounds both conventional and un-), but Meff's mandolin is often what really puts the icing on the cake, that little bit of shimmer to make it jump out of the speakers at you. Other elements that fill in include accordion, lap steel, upright bass, ukulele and more (Jojo Lazar's "frilly tushy" is listed in the credits but can only be appreciated in a live setting). The CD's 18 tracks present a little over an hour of music that is solid from start to end, both immediately and able to withstand repeated listening and even study. The lyrics are fascinating, like little glimpses into unseen worlds, fragments of sci-fi imagery, emotional impressions, and odd phrases that are probably symbolic in some obscure way.

Trapdoors presents some of the same elements, but in a much different setting that's most effective if you're already familiar with the milieu. It's very atmospheric and low-key, only half the length of Soft Time Traveler. The world is stripped down to Sickert's voice, an acoustic guitar, a piano, and some electronic ambiance, with only rare contributions from the rest. The end of the world party has ended, most of the guests have drifted off into the darkness or passed out on the floor, but the psychic is still there, quietly singing a sad requiem for life as we knew it. "Is it really the end of the world? I hope so."

Franco Leprino - Integrati... Disintegrati – Although armed with an arsenal of synthesizers, Leprino's album isn't really a true electronic album in the same sense that Tangerine Dream is, but a very individual music with avant garde...  (1995) » Read more

Crush That Hum! We Shall Have No Humming Here!