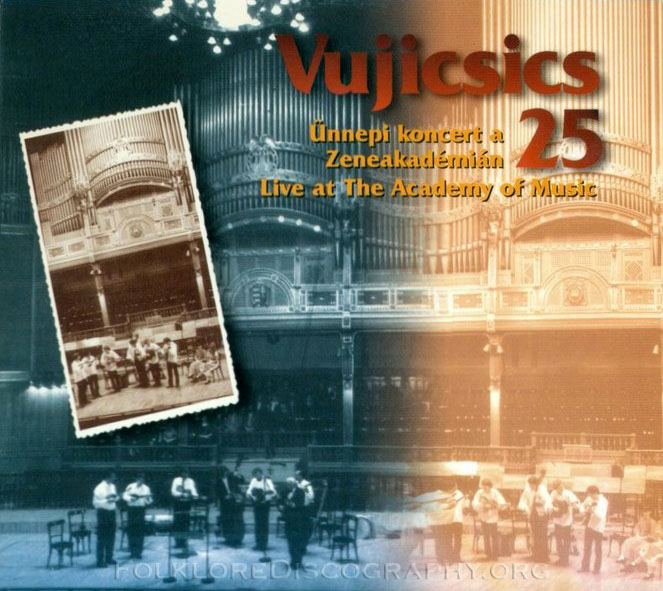 Founded in 1974, the Vujicsics Ensemble is perhaps Hungary’s most widely respected folk group. Named for Tilhamér Vujicsics, a composer and musical folklorist in the tradition of Béla Bartók, the ensemble is devoted to the music of Hungary’s Serbian and Croatian minorities, as well as to that of Hungary’s neighbors in the former Yugoslavia. This CD, recorded live at the Academy of Music in Budapest, celebrates the band’s 25th anniversary and features guest appearances by Márta Sebestyén and other Hungarian folksters. Its 17 tracks reflect impeccable musicianship and complete fidelity to traditional stylings. Mandolin-like instruments of various sizes called “tamburitzas” provide most of the sound here (all seven band members play them at some point), but accordion, violin, clarinet, bagpipe, shepherd’s pipe, and vocals (both male and female) are also featured. The songs are traditional south Slavic folkdances (kolos and oros, mostly), although a couple of tunes, including the eight-minute, bolero-esque “Rastanak” (with passionate clarinet playing by Mihály Borbély), have a more Gypsy feel to them. If you enjoy traditional folk from the Balkans – or if you’re looking for a great place to begin exploring it – then 25 is really a must-have. But if you’re expecting to hear progressive rock like Solaris or After Crying (or even prog folk like Kolinda), then 25 will probably leave you wanting, because that’s not what this CD is — not by a long shot.

Step Ahead - Step Ahead – Step Ahead was one of France's best symphonic bands and this, their only release, was a quite a rarity, not only in availability but also in quality. In the early eighties, few bands kept the...  (1993) » Read more