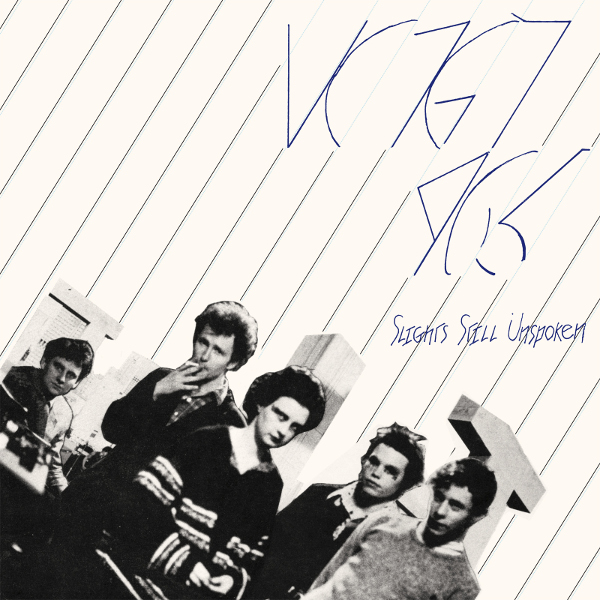 Voigt/465 was a short-lived DIY post punk band from Sydney, Australia that lasted from 1976 - 1979. In 1978 they self-released one of the first DIY 45s from Australia “State” b/w “A Secret West,” which was picked up by John Peel in the UK. In 1979, bassist Lindsay O’Meara decided to leave the band, so Voigt/465 recorded their only as a testament to the times, Slights Unspoken. It is a shame really that Lindsay left the band as his departure terminated what could have become a band destined for greatness. Slights Unspoken is undoubtably one of the most fascinating post punk/DIY albums from the late 70s. Those of us who remember the late 70s musical doldrums in the wake of prog rock and punk would have welcomed this refreshing breath of musical inventiveness. Voigt/465 fused musical influences from such diverse bands as Can, Faust, Slapp Happy, Wire, and possibly Killing Joke. They started at Sydney Technical Boys High when glam rock aficionados Phil Turnbull (vocals and keyboards) and Lindsay O’Meara (bass) decided to form a band. They recruited guitarist Rod Pobestek, whose father had a factory space they used for rehearsals. Drummer Bruce Stalder completed the lineup for their freaky Krautrock and psychedelic sound. Their first live performance was a disaster and a few weeks later Rae Macron Cru joined the band on vocals. Guerssen has now resurrected this obscure lost classic album and released it both as an LP and CD on June 15, 2017. They included the DIY single with the album and to balance the two LP sides, the running order is different between the CD and the LP. In addition, the CD and digital downloads contain five bonus tracks. In case you are curious about the cover art, the image is taken from a 1978 photo of the band under the pylons of the Western Distributor at Darling Harbour in Sydney shortly before their gig was shut down. The CD opens with their single, with “State” having some elements of Can’s “Father Cannot Yell” and the flip side “A Secret West” combining electronics, punk sensibility, dissonance, and Rae’s odd singing style, similar to Dagmar Krause. However, the DIY nature of the production imparts a garage-band sound to both the single and the album. The album is quite accessible and innovative with alternating tempos, dissonance, and a no-holds-barred approach to song writing. For example, “A Welcome Mystery” is a high energy, complex song with the rapidly repeated phrase “A welcome mystery, but not the second reel.” I am not sure when the bonus tracks were recorded, but the music is a bit different from the single and album. “And the Following Page” is a dissonant prog / psych rock song that contains an interesting quiet interlude of just guitar and electronics. “So Long as One Knows” is an excellent song showing a strong Faust influence as Phil and Rae sing different words in the song title that is endlessly repeated with them eventually playing around with the word order. The song morphs into a guitar and electronics Krautrock jam, that then slows down, becoming abstract and ending the song with an out of tune piano. The last three songs are live recordings of cover tunes. The first is a cover of Roxy Music’s “Remake / Remodel,” which you would never recognize unless you listened carefully to the lyrics. Voigt/465 owns the song with punk intensity, blistering electronics, and free improv meandering. The next is a killer cover of Can’s “Connection.” And the final track is a fantastic punk cover of Faust’s “It’s a Rainy Day” that provides much more interest and extends the song in the spirit of Faust-inspired improv. So definitely pick up a copy for yourself if you run across it online or in your favorite record store.