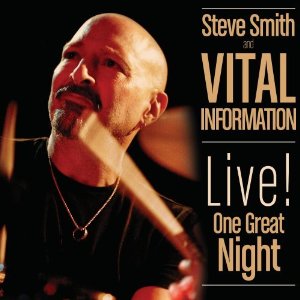 Smith, who was the drummer for Journey during their rise to fame in the 1977-84 period exited that band at the height of their fame to concentrate on his Vital Information project which had started a year earlier on the side. An all-instrumental electric jazz ensemble, he's never looked back. Over about a dozen albums the band has forged a sound of their own, with Smith – a versatile and intense player – at its core, and guitarist Frank Gambale and keyboardist Tom Coster along for most of those years. For this show, which took place in an unnamed club in Ashland, Oregon in November 2007, and on the studio album Vitalization that preceded it, the departing Gambale was replaced by Vinny Valentino, contributing some great guitar work and interesting voice parts as well. Most of the material here is culled from Vitalization and 2004's Come on In, and represents a veritable smorgasbord of sounds and styles that the band had developed over years of playing and recording, informed by swing, hard fusion, Indian rhythms and funk. There are no shortage of chops in this set, which becomes even more evident when watching the companion DVD which includes the entire audio set plus one additional cut. Indeed, this was one great night and the multi-camera shoot captures all of it. The band is currently doing a 30th anniversary tour with the same lineup, coming to a city near you.