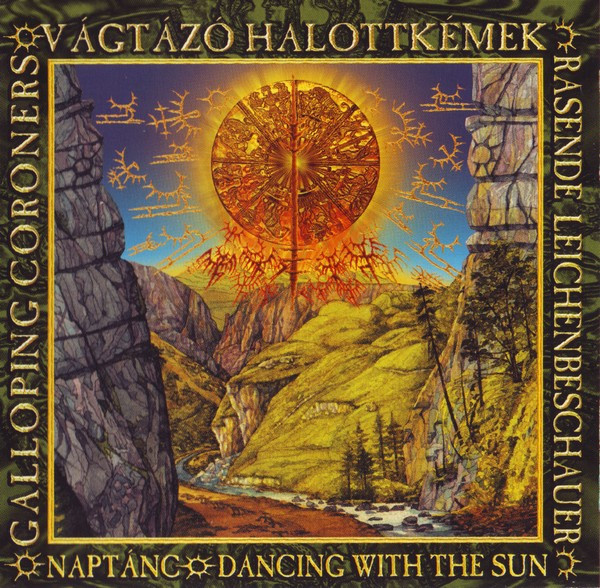 Discovering this CD was serendipitous. I was in the record store browsing through the racks and this CD’s neo-psychedelic artwork caught my eye. Then the quote on the back clinched my decision to buy “Tribal rhythms and melodies of the ancient Huns ride through the cosmos with a psychedelic fury of electric guitars and kettle drums. Shamanistic space rock visions from these legendary Hungarian pagans.” I was in for a treat! But let me give you a little background on the band first.

In the mid 70s, Hungary was a repressed Communist country. Musicians outside the pop mainstream had a difficult time. Despite these obstacles, Vágtázó Halottkémek (Hungarian for Galloping Coroners) formed in 1975 and started creating their unique musical vision. Over the years their explosive and controversial live performances (the band’s first eight shows were shut down by police raids and they were quickly blacklisted by the Communist government) the Galloping Coroners have become recognized throughout Europe as a distinguished cult band. Now with their latest release Naptánc (Hungarian for Dancing with the Sun), the Galloping Coroners have found a home on a US label.

Galloping over the steppes under the leadership of Grandpierre Attila, the Galloping Coroners’ latest release, Dancing with the Sun is a live recording of 11 songs culled from a series of European concerts in 1999 plus a bonus studio track recorded in 1998. The music is a fascinating blend of punk, psychedelic, progressive, and space rock. All song titles and lyrics are in Hungarian. The liner notes give the lyrics in both Hungarian and English. The first song, "Conjuring up the Wonder Stag," is an energetic punk/prog rock fusion with shouted exhortations, chants, and melodic guitars. The next song, "Inspiration," is a short percussive piece with the drone of a didjeridoo. The title track is an ethnic / folk influenced song that really rocks! They then slow things down a bit with an instrumental, "Crytallising Desire," a song with bass, percussion, acoustic guitar, and chanting. It has a quiet dreamlike quality. Next in time is "Tiny Red Dragons," with acoustic guitars sounding like an American Western complete with “Indian” chanting even though the lyrics are more in the realm of faerie. The sixth song is "A Fairy-Tale Playground," a 16 minute instrumental with violin, guitar, bass, and chimes. This is a beautiful song similar in style to acoustic Krautrock (Witthueser and Westrup). "Spinning into Joy" is a short instrumental (one minute) that slips by unnoticed after the previous song. The eighth song is "Fire-Full Dance," another instrumental that changes direction. It is dissonant with scraping guitars and Shamanistic shouting. It ushers in "The Life of the Spherics," a martial piece with pounding kettle drums. This song is about signals from space and the Galloping Coroners’ response. "With My Ancestors" follows, another aggressive song that captures the essence of the Hun and nomadic life. The final live song is "Huns in Budapest." This is a loud, raucous, hardcore punk influenced song on nationalistic Hun pride. The album closes with the bonus studio track, "Magus Star," a space rock song with lots of reverb, electric guitar, and bass. It reminds me of the obscure British band Dead Flowers.

Dancing with the Sun is a superb American debut for this Hungarian band. I highly recommend this recording!

Lightshine - Feeling – Lightshine were a mid-70s German band that were fairly well known in their time, gigging heavily and opening for groups such as Hoelderlin, Jane, Colosseum II, and The Scorpions. They self-released...  (1995) » Read more