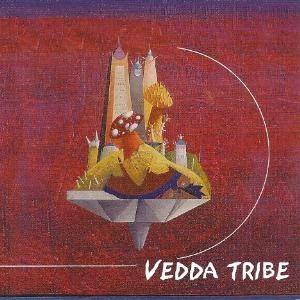 Vedda Tribe is an Italian three piece of guitar / keyboards / drums; no bass credit is given but that is a bass note I hear. They play in an aggressive manner that might recall classic King Crimson at times, but for the most part Vedda Tribe plays head trippin’ psych-rock. A guitar will quietly build over a bass theme, and with each progression the drums kick in louder. Guitarist Filippo Guerini does play it straight, but fuzzed out tones seem to be his favorite. Mauro Pamiro is the surprise here, he plays piano and synth, and his piano adds a true uniqueness to this band. “Hypercube” features a strong piano lead backed with intense fuzzed out guitar, but some of his dwiddly synth effects are a bit basic. And all the while drummer Flavio Leva impresses. The band has many a good idea that never really pays off. For example, “Nebbia di Lilliput” just goes on too long with a repeated riff that I didn’t find that great to start with. As a three piece the band works very well together, each member seems to get his space. “Democrazy” is a highlight, a solid jam with no weak sections. “Etamenaki” features the album’s only vocal track. The vocals are tweaked and tripped, and Guerini sounds like he is underwater. I love this song; opening with really cool sustained guitar solo and the closing lyric, “Oh how my brain hurts.” A spotty release but with some real bright spots.