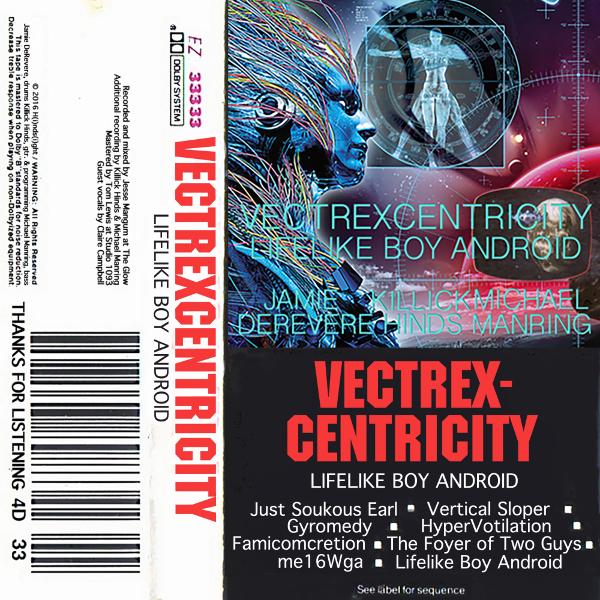 Seeing the names on the cover of this release might very well lead to confusion — at least for those familiar with any of them. To fans of progressive rock, Michael Manring is most likely the best known. His masterful work on bass has graced a boatload of great albums from the technical shredding of McGill / Manring / Stevens, the RIO of A Triggering Myth, the world fusion of Barry Cleveland, and whatever you want to call Attention Deficit. But he’s always had a softer side, as with Cloud Chamber and his early Windham Hill releases. Killick Hinds is more known in avant-garde circles for his experimental guitar (and guitar-like creations), which often ranges into atonal, chaotic craziness, whether acoustic or amplified. So what do you get when you put these two together with a drummer for recording sessions? Manring’s fretless bass is generally dominant when he’s playing, and he’s in a generally melodic mood for these eight tracks, calling to mind Mick Karn, John Giblin, and Jaco Pastorius. Hinds provides more in the way of mood and atmosphere than standout playing with his fretless guitar and electronics. There are long quiet passages of indistinct sounds, sections that lock into a groove and go with it for a while, and odd electronic parts that sound like nothing else. “HyperVotilation” is one of the latter, four minutes of unison guitar / bass arpeggios accompanied by processed vocals while the drums provide cross rhythms that sometimes work with and sometimes against the continuous unison line. “Vertical Sloper” sounds a bit like a freaky outtake from a Police session that never got vocals. And anytime there’s a brief hint of a Torn / Karn / Bozzio vibe, something weird will happen. For one thing, Jamie DeRevere is a much jazzier drummer than Terry Bozzio, and plays a compact kit without any percussive augmentation. For another, Hinds goes a different way than David Torn in his expansion of the guitar’s palette. And at times there is a prominent electronic component, as with the rapid arpeggios of “Famicomcretion.” Lifelike Boy Android is the result of three talented musicians getting together with no preconceptions or stylistic limitations and coming up with something new that only they could have created. Life should be an adventure, and so should music. But don’t be put off if the first listen doesn’t click, and give it a chance. It’s well worth the time and effort.

Sophya Baccini - Aradia – Hers was one of the most powerful voices in Italian rock when she fronted the band Presence in the mid-to-late 90s, with albums like The Sleeper Awakes and Black Opera to their credit. Apparently...  (2011) » Read more

Only the Elk Remains