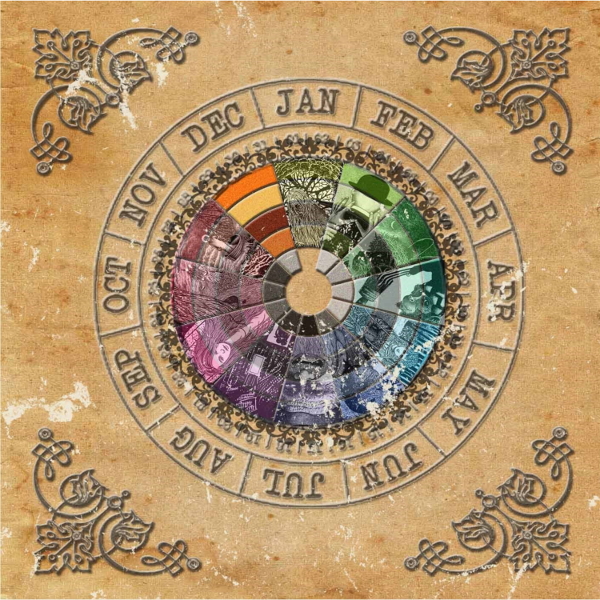 In 2016 Mega Dodo released a compilation of dark folk/folk horror tunes curated by Chris Lambert, Songs from the Black Meadow, to accompany his book. Once again, Chris returns with a new book, Wyrd Kalendar, and an accompanying CD due for release on January 1, 2019, the beginning of the next wyrd year. Each month is presented by a different artist or group, some of whom were on Songs from the Black Meadow (Keith Seatman, Emily Jones, The Souless Party, and The Rowan Amber MIll), some familiar names (Crystal Jacqueline, Beautify Junkyards, Alison O’Donnell, Icarus Peel, and Tír na nÓg), and some new names (Widows Weeds, Concretism, Wyrdstone, and The Mortllake Bookclub). As you make your way through the year you encounter gothic death knells, outré electronics, psych-folk singers, Crystal Jacqueline’s gothic psych fool’s errand, a sinister May eve, Alison O’Donnell’s ode to a wasp nest, a surreal carnival by the sea, Icarus Peel’s sad and souful R&B inspired tune of unrequited love, Tír na nÓg’s acid folk ode to Autumn, a beautifully bucolic harvest, a dark November eve similar to early Attrition, and a chilly winter carol with wordless vocals and orchestral strings ringing in the winter solstice. The final track sums up the year with an eerie abstract piece with half heard voices of the Mortlake Book Club playing an unusual game of Exquisite Corpse. Join Chris Lambert and his musical quests as they guide you through the twelve months of the year weaving tales of magic, murder, terror, love and the wyrd.