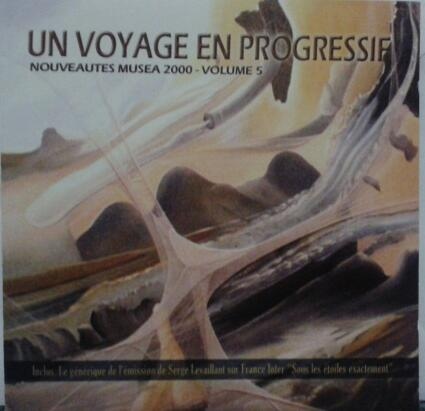 We all know that one cut off of a sampler can’t possibly give an accurate picture of a band’s full breadth and quality. But if the purpose of a sampler slot is to shine positive light on a group in order to lure the listener into purchasing one a release of their own then this has to be Musea’s best one to date. What’s fueling the strength of this collection is the recent burst of quality and creativity from Japan, namely from veterans Kenso and newcomers KBB. The latter (plus three other Japanese bands) is represented here with an incendiary prog rock instrumental taken from Lost and Found, a disc that every Exposé reader should own. This approach is revisited in Cafeïne’s “Hubble,” Six North’s “Kundabuffer,” and Decadence’s “The Dancing Bells.” Each track serves up exciting and supercharged rock instrumentals featuring fierce soloing (typically from the guitars and keys) with virtuoso backing from the rhythm sections. What’s especially nice about this style is that it achieves what prog metal bands like Shadow Gallery and Dream Theater are after without the adolescent sentimentality and grandiose theatrics. For those wishing for something a bit more calming, tracks from Jean-Pascal Boffo and Germany’s Versus X are both simultaneously dynamic and restrained, demonstrating superior control and precision. On the whole there’s a maturity and intelligence to this collection that could just about restore respect to the prog genre and I heartily recommend it for those wishing to glimpse the best that today’s progressive rock has to offer.