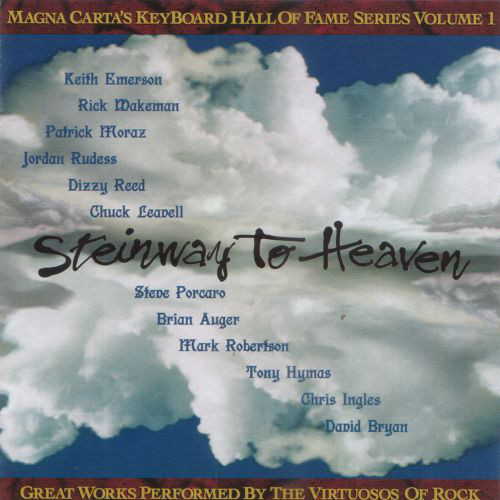 Yup. A full album of rock keyboard gods performing straight ahead (almost) classical pieces on piano, totally solo, sink or swim. Indeed this is proof positive that the likes of Emerson, Wakeman, Brian Auger, Patrick Moraz, Steve Porcaro, and a handful of others have what it takes; but the bigger underlying question is: beyond that, what does this album do? Why would any classical fan buy this in favor of similarly perfect versions by some stuffy better known classical pianist? Putting that question aside, this is one enjoyable and very impressive disc that I'm certain most would enjoy. Two pieces by Beethoven, one each by Liszt, Fauré, Ravel, Brahms, Prokofiev, Ginastera (guess who?), and four by Chopin (that's way too much Chopin for me) are covered by the aforementioned players, plus Dizzy Reed (Guns n' Roses), Chuck Leavell (Sea Level), Tony Hymas (Jeff Beck), David Bryan (Bon Jovi), Mark Robertson (Cairo), Jordan Rudess (Dixie Dregs) and Chris Ingles (Shadow Gallery). By the way, the subtitle of this disc is "Magna Carta's Keyboard Hall of Fame, Volume One"; I have an idea for volume two: why not get a bunch of classical pianists to make an album showing what they can do playing rock numbers on a Hammond B3 with a three piece band? 'Nuff said; this is a good one for what it is.