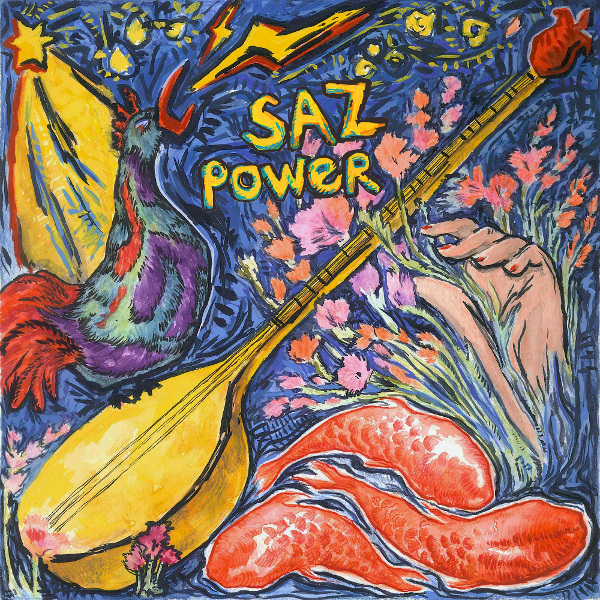 The burning question here is, what is a saz? The saz or bağlama is a member of the family of plucked string, long-necked lutes used in Ottoman classical music, Turkish folk music, Iranian music, Azeri music, Kurdish music, Assyrian music, and Armenian music, and in parts of Syria, Iraq, and the Balkan countries. Since the saz has a centuries-old tradition of wandering bards, as well as predominant in 70s psychedelic Anatolian rock, Turkish musician Demir Kerem Atay (AKA Elektro Hafız) decided to showcase different saz models and modes of playing through different countries on Saz Power. This compilation features musicians from Turkey, Denmark, France, Germany, Poland, and Israel playing either acoustic or electric saz in rock settings. I did not know what to expect before listening to the music. Would it be ethnic music for a limited audience? Or something entirely different? What we have is a mixture of eleven instrumental and vocal tunes based on different Anatolian folk music or contemporary compositions. All are in the rock or psychedelic rock format with drums, bass, electric guitar, organ, and synths supporting the saz. The tunes that impressed me are Elektro Hafiz’ “Lübodisko,” Baba Zula’s “Aşıkların Sözü Kalır (Ironhand Power Version),” Boogie Balagan’s “Istanbul Mahabul,” and Derya Yıldırım & Grup Şimşek’s “Üç Kız Bir Ana.” I especially enjoyed the Baba Zula track, as it reminds me of the Hungarian band Vágtázó Halottkémek (AKA Galloping Coroners), with the song’s trippy psych riffing, sounds of horses, the hypnotic chanting of the song title, and the sense of the horde charging along the steppes. Saz Power is one refreshing listening experience and worthy of investigation.

I don’t remember anymore when I first discovered the wonders of Turkish psychedelic rock, but it’s stuck with me for a long time. Starting back in the 60s, European and American rockers discovered the sounds of Turkish music, an at the same time, Turkish musicians discovered the power of rock. Of course, in European classical music, there’s a thread going back much further of composers (Haydn, Beethoven, Mozart, and others) who were intrigued by the scales and rhythms of Turkey. The music of India exerted a similar pull in the late 60s, but Turkish music has the advantage of featuring many pieces that don’t run to the lengths of a raga, thus are more immediately accessible. From the Turkish side, there’s so much great music from Cem Karaca, Barış Manço, Erkin Koray, Fikret Kızılok, and more, that it should be no surprise that the quality carries on to the present time. This collection presents 11 tracks featuring one of the iconic Turkish instruments, the saz, in varying contexts by a variety of modern players. There’s a rootsy blues groove with slide guitar and saz from Hudna, a funky electronic piece from MLDVA & Çınar Timur, a psych-jazz workout from Elektro Hafız, a super-tight fusiony piece from Yasak Helva, and more. It’s hard to pick favorites when everything is so good. The balance of instrumental and vocal tunes is good, allowing us to focus on the saz but providing more variety than a purely instrumental collection would. So whether you’re a long-time fan or total newcomer to Turkish music, Saz Power is a welcome release proving that the guitar is not the only instrument that can rock.

Big Brother & the Holding Company - Live in San Francisco, 1966 – Live in San Francisco 1966 is an early recording by the band, from July 28th, only about six weeks after Janis joined the band. The fourteen songs presented here are loaded with energy, great playing...  (2004) » Read more

Erik Baron / d-z Akørd - De Futura (Hiroshima) – We’ve covered bassist Erik Baron’s releases in these pages before, and all have been exceptional, but there’s never been one quite like this. Here he has assembled an army of...  (2008) » Read more

Aleph - Surface Tension – What a special album this is, a forgotten rarity that truly is something of a lost classic. Aleph, a sextet based in Sydney, were one of the few Australian bands (along with Sebastian Hardie, Airlord,...  (1997) » Read more

Evan Ziporyn - Animal Act – Not exactly a household name, this young American composer’s name was previously only known to me as a member of the San Francisco area’s “famous” — relatively speaking...  (1999) » Read more